Somehow, in the summer of 1970, I ended up in an anarchist campground deep in the mountains of Southern France. Most of the campers were young French and Italian live wires, tense, raucous, full of theater. But there was also a contingent of older people, Spanish Civil War veterans, still fugitives after 30 years, living out of the backs of vans.

They were the ones I wanted to talk to. I wanted to ask one thing: What was it like to be there back then, at a prophetic moment in modern history, in a war that continues, for some, to be burnished with an ethical glow? But they were reticent, and our jumble of Spanish, French and English probably wouldn’t have taken us far, anyway.

After all these years I’ve found some answers to my question in an exhibition called “The Mexican Suitcase” at the International Center of Photography. The show documents wartime life in Spain between 1936 and 1939 from an insider-outsider vantage: through the eyes of three photographers — Robert Capa, Gerda Taro and David Seymour, known as Chim — who were not Spanish but who were intensely committed to what they saw as a do-or-die anti-fascist struggle.

Exiled Republicans marching down the beach to an internment camp in Le Barcarès, France. March 1939. Credit Robert Capa/Magnum, courtesy of the International Center of Photography

They were also committed to a new style of wartime journalism, which found photographers embedding themselves right in the center of combat and shooting, rapid-fire and up-close, everything around them. This total immersion, made possible by increasingly hand-held cameras, generated huge numbers of images. And that’s what you get in this show: hundreds and hundreds of tiny pictures lined up edge to edge on contact sheets to create a display of a kind that museumgoers rarely encounter but that photographers see all the time: squint-inducing, unedited, in progress.

As it happened, for over a half-century, no one, at least no one we know of, including photographers, laid eyes on the material in this exhibition until it arrived in three small boxes — the suitcase of the title — in New York in 2007, trailing a mysterious history behind it.

The photographers who took the pictures met in Paris in 1934. They were in their 20s, politically leftist, all from elsewhere: Capa started out life as Endre Friedmann in Hungary; Taro as Gerta Pohorylle in Germany; Seymour as Dawid Szymin in Poland.

Seymour worked as a staff photographer for a magazine. Capa and Taro, who had become lovers, were inventively scraping by. She promoted his photographs; he taught her how to use a camera. Then in 1936 all three left for Spain, where right-wing Nationalist insurgents, backed by arms from Hitler and Mussolini, were trying to unseat the Republican government.

The photographers spent much of that year and the next moving around the country, covering battles and their aftermath: Madrid’s buildings reduced to blasted shells. At the same time, they focused on a different set of motifs: the daily routines that persist through any war, any crisis — men harvesting, women shopping, children going to school.

Both kinds of images, outraging or reassuring, were fully intended as propaganda for the government under siege, but also as a potential source of income for the photographers. Sure enough, war pictures by Capa, Taro and Seymour, as Chim, were avidly bought by European magazines — the show has vintage copies of dozens of them, many with eye-zapping photo spreads — and Capa became an international media star. 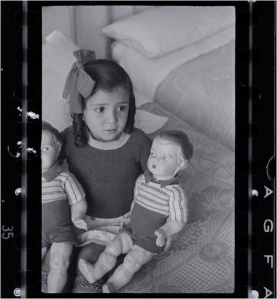 “The Mexican Suitcase”: A Spanish Civil War refugee in Barcelona, photographed by David Seymour, is in this show at the International Center of Photography. Credit Estate of Chim (David Seymour)/Magnum
Advertisement

Then tragedy struck. In July 1937, Taro was killed in action near Madrid. Afterward Capa left for a stint in China, but came back to Spain to witness and record the Republican defeat. He and Seymour separately photographed exhausted refugees pouring into internment camps in France.

That was in 1939. World War II was about to begin. Both men knew that, as Jews with left-wing histories, they had to get out of Europe. Seymour left for the United States ahead of the war; Capa’s departure was a scramble. At the last minute he packed three boxes of rolled and cut film — 4,500 negatives in all — and gave them to a photographer friend, asking him to send them on to New York, where Capa was headed.

The forwarding never happened. Somehow the boxes ended up with the Mexican ambassador to the Vichy government in Paris and traveled, maybe by accident, to Mexico City with him. After that they effectively vanished for decades, during which time Capa died, killed by a land mine in Indochina in 1954, as did Seymour, struck down by a sniper in Egypt two years later.

In 1999 Cornell Capa, Robert’s brother and founder of the International Center of Photography, got word that the boxes had surfaced in Mexico. But his informant proved elusive, and the lost film finally arrived in New York only three years ago. The film has since been processed, digitally scanned, printed as contact sheets and closely studied by Cynthia Young, an assistant curator at the center who organized the show and edited its impressive two-volume catalog.

The first big surprise on opening the boxes was how much of the film was not Capa’s. About a third has been attributed to Taro, another third to Seymour, significantly expanding the known Spanish Civil War output of two photographers who have, until recently, stood in Capa’s shadow.

Taro’s career was extremely short, barely a year, and involved collaborations with Capa. But she pulled away to work on her own and comes across as a bold presence here in her searching, tender pictures of quotidian routine in the Republican stronghold of Valencia in the spring of 1937, in her brutally unblinking views of the city morgue after a devastating air raid, and in her eerily lighted views of the Battle of Brunete, where she would die.

Seymour’s work is in some ways even more surprising. He didn’t have Capa’s anarchic bravado, but his Spanish photography, from portraits of anonymous soldiers and anxious children to scenes inside pro-Republican Basque monasteries, has great range and depth. Even his pictures from the front lines feel somber and restrained, never sensational.

And Capa is Capa, fully charged, fearless, with an operatic instinct for epic storytelling. The original negatives for some of his classic shots were in the boxes, though not the one for his famous “Falling Soldier,” which catches a man at the fatal instant a bullet hits. Skeptics claim the scene was staged for the camera; the International Center of Photography says no. Whatever the truth, there is research to be done to determine which of the many scenes of fighting in the negatives were re-enactments, arranged for propaganda or journalistic profit.

Certain things in the show, however, are real beyond doubt. The three boxes are timeworn but intact. So is a tattered telegram sent by Taro from Spain to Capa in Paris, requesting that he bring new photographic equipment, but also coffee and chocolate. And then there are four notebooks, on loan from the National Archives in Paris, in which the photographers regularly pasted contact prints of new work.

The notebooks had a practical function, as records of images published or available for sale. They also, as relics do, suggest personal associations. You can easily imagine Taro turning the pages and feeling pride in what she’d done, as you can envision Capa, an unsentimental man, carefully folding and unfolding and refolding her telegram.

Also surely real are the many images of everyday Spanish life, which form a parallel universe to the war photographs. The scenes they show are simply too ordinary to be fiction: farmers in their fields; a street cobbler at work; a nun in an angel-wing wimple; an anxious child clutching a doll; a dog trotting down a village street; curtains in a window; distant mountains bathed in summer light.

One morning at dawn in 1970 in the anarchist campground, a convoy of armed French police suddenly appeared. They’d come to check identity papers, see who was legal and who was not. The campers, young and old, high-tailed it into the woods. They were used to these interruptions. I, dazed and half-asleep, handed over my passport, submitted to a grilling, then, after the police had left, decided to hit the road.

I’ve always a little regretted that I never got to ask my what-was-it-like question. So how sweet to find a response packed into the pictures here.