From the moment I touched ground, I have loved this town!

I caught a painfully early flight to Berlin Monday morning so that I could join a walking tour (Insider Tours Famous City Walk) by 10 am. I dropped off my bag at my hotel (the berlin mark for those planning trips – very reasonable rates and great location in former west berlin but very no frills, clean, comfy bed but tiny shower) and they gave me a room right away. I walked the 3 blocks to the starting point of the tour and grabbed a pastry and a coffee while I waited.

The tour was led by Nigel, a British ex-pat history professor who had been a diplomat for 5 years and who also claimed to have been a spy for Britain in Berlin during the cold war. He said he had to be able to speak German without an accent and was trained in speaking Russian for 2 years before he was assigned. Then he and his comrades crossed into East Berlin and stole armaments and took photographs and gathered intelligence on what the Russians were doing in East Berlin. He was there on the day (prior to the wall being built which didn’t happen until 1961) when the Americans rolled their tanks down the street to the edge of the international no go zone, and then the Russians rolled their tanks up to the edge of the east Berlin international no go zone, and was there until the Russians retreated and everyone breathed a sigh of relief. He was also there the day the Russians started installing the wall – which no-one had anticipated – and which for the first couple of days was simply rolled out barbed wire. He says he took a bunch of soldiers and put them on the back of a tank and got huge rolls of barbed wire and got them to start throwing it off the back of the tank, and realized there was no way they could take down the wall as quickly as the Russians were putting it up, so the mission had to be aborted. 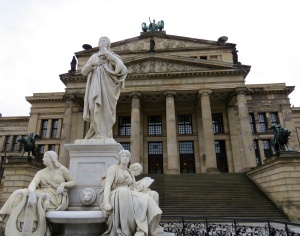 All of this added much colour to the tour and he was also hilarious and entertaining and engaged equally a class of junior high school age students and adults. We saw all the main sites – Checkpoint Charlie, Brandenburg Gate, and various former Nazi sites, including standing over the location where Hitler committed suicide in the bunker below. A lot of this was a bit creepy but very interesting history. The b&w photo below is the same square as in the previous shot but was taken during one of Hitler’s earliest rallies.   Bizarrely, it was May 1st so they erected a giant maypole in the centre of the square.  The Jewish Memorial is amazing – a large tract of land has been filled with concrete blocks that you walk amongst. Perspective is intentionally skewed and it can be a bit disorienting walking among them. Nigel explained that only in the past 5 years or so have the Germans institutionally begun to face their ugly past head on. In part this is being done now because there is a completely new generation of students now who have never heard of the war and authorities fear a recurrence of neo-Naziism. They have a list of every single Jewish person who lost their life to the Nazis, 6.2 million names, at the site of the memorial. They have added “stumbling stones” to the city, installed in the sidewalk, in locations where a person lived and had disappeared. This has had a profound effect, because, as happened to Nigel, you come out the door of your apartment one morning and find a stone embedded there about a person who lived next door to you who was “disappeared” and you didn’t have a clue about it until the “stumbling stone” appeared. They have added other art installations throughout the city and are building more and more memorials and reminders. 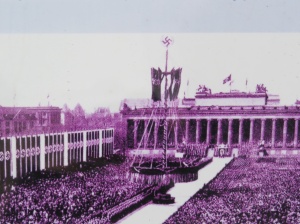 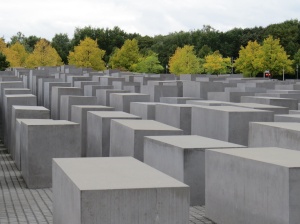 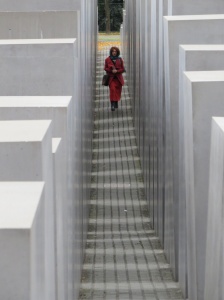 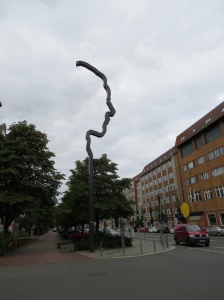 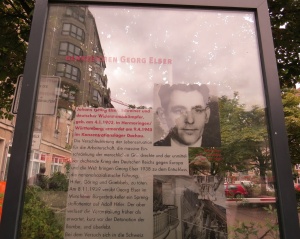 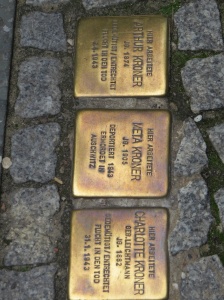 Another memorial was a 4-metre square plexiglass piece that you look down into on the square in front of the university. In there you see blank white shelving hung upside down, enough shelving to house 20,000 books. But there are no books here. This is installed on the spot where the Nazis burned 20,000 books. Very effective. The artist quoted Heinrich Heine, a German who in 1821 famously said, “where they have burned books, they will end in burning human beings.”

The Neue Wache memorial was the most moving one for me. It had been a memorial for WWII with an unknown soldier and a holocaust victim buried there. There was an oculus cut into the ceiling. But after reunification a mother complained that she had nowhere to memorialize or honour her son and hadn’t had a chance to hold him when he died, and so a memorial was added for all victims of war and tyrrany, a statue of a mother holding her dead son. It evokes the same kind of painful beauty as Michaelangelo’s Pieta in St. Peter’s Basilica. The hole in the ceiling hasn’t been removed, and apparently it is quite profound to see the statue in the rain or in winter, covered in ice. 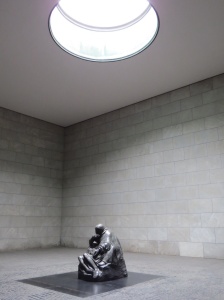 Out of all the destruction, and there are still areas downtown that haven’t been filled in after being bombed in the war, is coming creation. Construction is booming to a degree I have never seen anywhere else. The modern architecture is absolutely amazing. It is interesting how many buildings are being designed where perspective is intentionally wonky – this may be reflective of the Berliners who are still struggling to understand how they allowed the Nazis to take control of their country. The skyline has cranes, old classical buildings and brand new modern buildings all juxtaposed against one another. Large crazy pipes run up and down streets at each construction site, pumping out the water due to the very high water table. 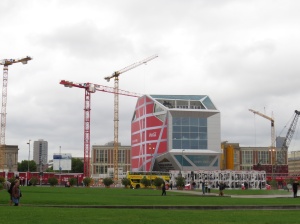 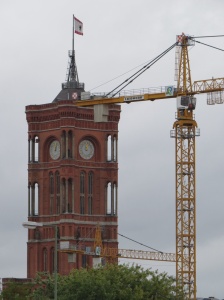 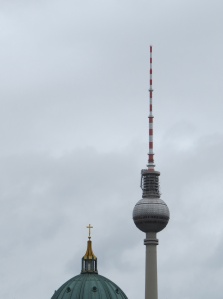 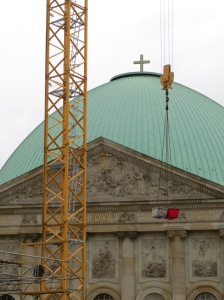 All of this visual stimulation I think reveals what is really going on in the psyche of the Berliner and the culture of German society. However, apparently the German psyche is quite capable of thinking in silos, because despite the collective guilt and the attempts to reconcile its past, many of them form a boorish lot, to be honest. They push, shove, butt in line and steal your cab. The salespeople are rude and the cyclists anarchists. The man at the train station information desk is the type who delights in picking wings off a fly, and he eyed my wings hungrily as he gave me the wrong platform number. It cannot be said that Berlin is boring; you suck it up, adopt a certain armour, and enjoy the ride!

1 thought on “I Heart Berlin”