Frederick II, Frederick the Great, was the greatest king Prussia ever had, and was a fascinating genius. An aesthete, I knew his palace I was visiting today would be special.

He had a brutal father whom he despised. His closest male friend (and likely lover), sought to help him escape Prussia and they planned to run away together. However his father had long reach, and soon caught up and captured Frederick and his accomplice. His father threw them both in prison on grounds of treason, and, in front of Frederick, executed his friend and accomplice. This was to impact on Frederick for the rest of his life. (And not dissimilar to both Peter the Great and Louis XVI who had witnessed violence at an early age. It also resonates with the outcome of Peter the Great’s son, Alexei, probably with Peter’s involvement. Being heir to the throne was especially dangerous in those dangerous times.)

After his father’s death, Frederick became king. As a child, he had loved playing with toy soldiers, drilling them and fighting battles and winning wars. He was to become Prussia’s greatest warrior king, most brilliant strategist, and he greatly expanded the Prussian empire.

In addition to being a great soldier, he was interested in interior design, style, clothing and music. He was an excellent flute player and made improvements to the design of the flute that remain in place today. He had great musicians in his court, including a son of Johann Sebastian Bach.

He built a summer palace in Potsdam, now a suburb of Berlin. He wanted to escape the politics and people in Berlin and created a place of refuge where he lived from April to October of each year. He named it “Sansoucci,” french for “carefree.” One could not attend, regardless of how important one was, unless invited. It was a relatively small palace, with only 12 rooms, but made up for size with style and quality. This palace rivalled Peterhof and Catherine’s Palace in beauty. The interior rooms were decorated in gold, and it literally dripped off the ceilings (no photography allowed again, I could omly find 1 interior image of the picture gallery online you can just see a pink settee in the foreground). There was beautiful French art (he considered himself a “francophile” and loved all things french). There was a rotunda built on the design of the Pantheon in Rome. There was an art gallery with pink silk-covered settees. He had a library of over 2,000 books. There were guest rooms decorated to bring nature indoors. 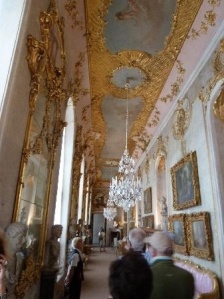 The exterior of the palace is equally stunning, and the grounds surrounding the palace are magnificent. On the back, “the hill of ruins,” (he loved ruins but Prussia didn’t have any, so he had these built and installed on his property). On the front, a formal garden, statuary and a property that rivals Versailles. 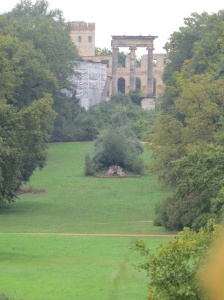 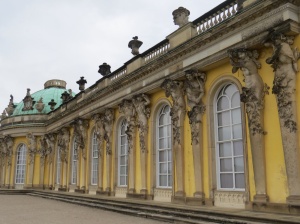 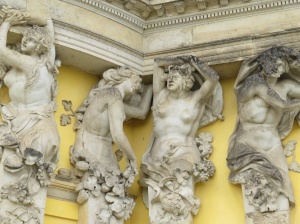 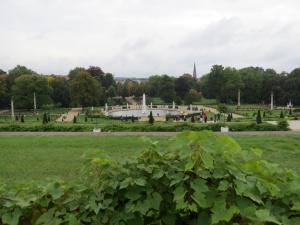 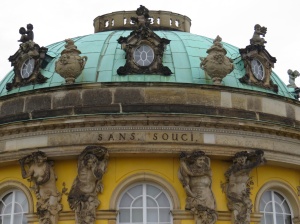 Frederick married on paper only. His wife never lived with him, and was never invited to Sansoucci. Frederick served as King for 46 years, and died at Sansoucci palace. He had no issue, and his nephew succeeded him.

There was a vey real connection here to Russia. Peter III, who would become Catherine the Great’s husband, came from Prussia and admired everything Prussian. When Catherine and Peter were summoned to St. Petersburg to succeed Empress Elizabeth, Frederick the Great sent a fabulous carriage as a gift in thanks for this recognition of Prussian nobility. (We saw that carriage in the Armoury at Moscow.) Peter III was slightly mad, and was obsessed with Frederick the Great as a warrior king. He too played with toy soldiers and drilled real soldiers from a young age. His obsession with all things Prussian was Peter III’s downfall. He rejected anything Russian and honoured everything Prussian; for example, he changed the Russian military uniform to green because Prussia’s army wore green. He alienated and offended the Russian military and the Russian people, and this paved the way for Catherine’s coup and all of the great things Catherine did for Russia from the throne.

Back in Berlin, after a rest, I hit the stores. Shopping is wonderful in Berlin, and the Ku’damm, Berlin’s greatest shopping street, was dangerously located at the bottom of my block. I visited the famous Ke De We, a marvellous department store with mostly high end clothes but affordable ones as well. Another store I visited, “& Other Stories,” was fabulous, if I’d had my camera with me I would have photographed the shoes. I am hoping it is a chain, it was much like Anthropology without housewares. I did a tiny bit of shopping but mostly soaked in the cool Berlin vibe and windowshopped. I must come back here sometime on a shopping junket! 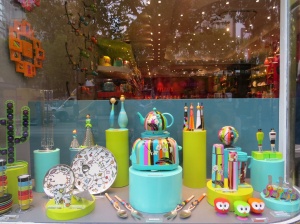