I managed to squeeze four performances into my weekend in Prague, known for its high quality, comparatively low cost live music.

Friday evening I toured a small but lovely museum dedicated to Dvorak, in a house built by nobility solely to host parties in. There were several of Dvorak’s instruments, writing desks, and musical scores. Dvorak played the organ, cello and piano, and began to compose music while he was still a student. Yet he was also interested in science, and once said, “I would give all my symphonies to have invented a steam engine.”

A liveried butler offered us Bechoravka, a famous Prague drink. I renamed it Fire. Whoo! We were then ushered into the salon, where a pianist, violinist (both professors of music at Prague’s Charles University) and three soloists sang Dvorak’s beautiful music. I had forgotten about Dvorak’s American ties – he lived in NYC for three years and had been appointed to develop and create “a national American music” (having been inspired by Smetana and helping to creating a Czech national music, classical music inspired by Czech folk music). He wrote the New World Symphony (several versions are on youtube). He stayed for only three years, however, and returned to Prague for the rest of his life.

The singers were magnificent and charming, the music lush, the setting exquisite. 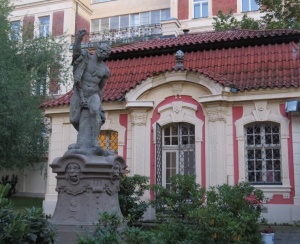 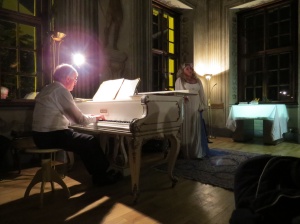 Saturday afternoon I attended a performance of “Pearls of Czech Music”at Lobkowicz Palace, a palace within the Prague Castle complex. The pianist was excellent although she might have played less virtuosic pieces which she had a little trouble taming at times.

I had seen the gorgeous Prague State Opera House from various vantage points along the river, and tonight I was seeing it close up. The interior was rich and warm with gold and red velvet. The boxes were hung with mirrors, and I imagined all of the scandals and intrigues that were spied in the glass. The opera buffa was The Two Widows, by Smetana, the Czech composer. The soloists sang beautifully and the orchestra breathed life into the music. Normally I am not partial toward comedies because the music tends to be lightweight, but the music was gorgeous and a happy ending was a welcome change. Delightful concert in a sumptuous setting. 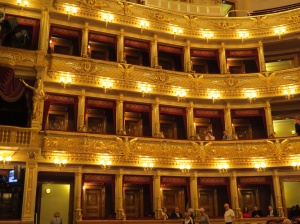 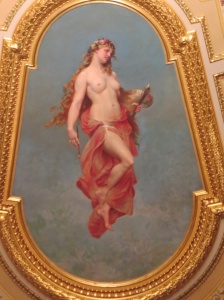 Coming out of the Opera House full of the music and walking along the river on a balmy night was magical.

The next night I was off to the opera again, this time at the stunning Estates Theatre. This was to be a trip highlight, and it had something to do with low expectations. I had seen the opera twice previously so I wasn’t bothered by the review which said the performance was a little rough in spots. I had been delighted to learn that Mozart’s Don Giovanni was to be performed in the Estates Theatre, the same theatre in which Mozart himself premiered the opera on October 29th, 1787. Furthermore, there is very strong evidence that Casanova was in the audience for the premiere. A Bad Boy Trio: Don Juan, Casanova and Mozart himself! How yummy! It is rare for a city to have two magnificent opera houses, but the Estates Theatre, bathed in green, was a close second to the PSOH. The physicality of the performers was a little stilted at first, but overall it was a delightful performance. The soloists were excellent, the orchestra was very good; the staging and costumes were updated but worked wonderfully with this story of lust and revenge. Another unforgettable evening! 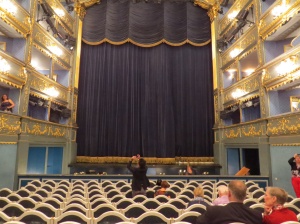 Prague is a city whose history – one dominated by occupations – shapes the national mindset. The Czech wry sense of humour and love of music just may have been the keys to its survival.