The Spanish people have suffered invasions since Roman times and most recently, still bear the scars of the Spanish Civil War, the Second World War and the Franco years in close succession. But what has hurt them has made them stronger, and various regions of the country are fiercely independent. Just a few days before we arrived in Barcelona, the electorate ousted a long-time conservative party and replaced it with a left-leaning government. There is an air of hopeful expectation in the country that the new leaders will allow more freedom for the regions to retain their cultural identity and pull the country together as a cultural quilt instead of as a threadbare, tenuous community.

The Catalan people are among the strongest, most independent and proud regions of the country. Barcelona is the headquarters of Catalonia and the brilliant flags for an independent Catalan nation hung outside many homes. Catalonia was an independent nation until 1492 when the Ferdinand and Isabella married and united Spain. In 1638, when Spain was ruled by the Hapsburgs and Catalans were harshly treated by Madrid,Catalonia revolted and fought for independence with the backing of France until they were defeated in 1652.

The Catalans have their own language, myths, music and cuisine. Among its greatest artists are Picasso, Dali and Miro. Miro may be a difficult artist to understand, and some of his own comments about his work may or may not assist:

“What I am looking for… is an immobile movement, something which would be the equivalent of what is called the eloquence of silence, or what St. John of the Cross, I think it was, described with the term ‘mute music’. ” 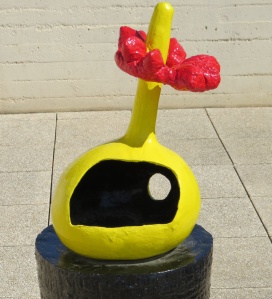 The great architect Gaudi created the Modernisme movement and his buildings define Barcelona (more on him subsequently).

This history and culture was beautiful to explore over our four days in the city. We toured the beautiful museum Fundacio Joan Miro dedicated to the modern artist. We visited an exhibition at the Museo Picasso to see how closely Picasso and Dali influenced one another, presented in pairings of their paintings. We learned that Picasso was a prodigy, painting portraits of staggering maturity at the age of 14. It has been so interesting to see these three artists’ formative years, having already seen how they collaborated with other intellectuals and painters later in Paris, when they were forced into exile as critics of the Franco regime. Among the most interesting pieces in the collection were Picasso’s take on the great Velazquez painting, considered by artists to be the greatest painting ever painted, Las Meninas (which we will see at the Prada in Madrid). We also visited the fine collection at the Monserrat Benedictine Monastery which included a Caravaggio, Picassos, Dalis, Impressionists and others.

Checking nets on the beach, Baixeras

The bullfighting ring has been converted into a shopping mall after a Catalan-wide ban on bullfighting largely to distinguish Catalan from the Castillian image represented by the bull. 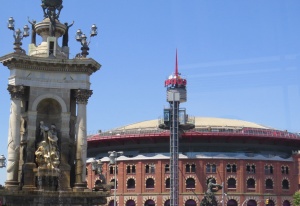 The distinct cuisine was a joy to discover both in little back alley cafes in the old Gothic Quarter and in modern, upscale restaurants we visited as a group. In the Barri Gotic (Gothic Quarter) and El Born districts, I was taken back to the pages of The Shadow of the Wind, a lovely story set in Barcelona which I read just before arriving. 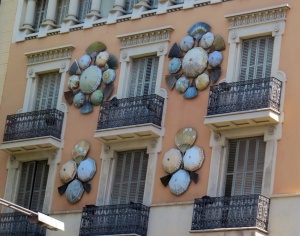 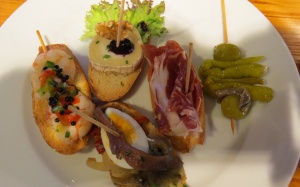 Our visit to Montserrat (serrated mountain) on our last full day in Barcelona was moving. The monastery has reached out to the community and is the heart and home of the Catalonia people: their refuge, their archives and library, and their spiritual home. It was moving to hear the boys and monks sing Gregorian chants in the Cathedral among the rocks that have carried religious weight since pagan times when Venus was worshipped here. 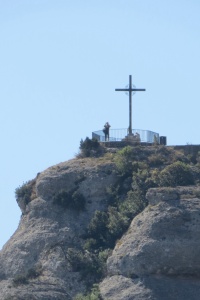 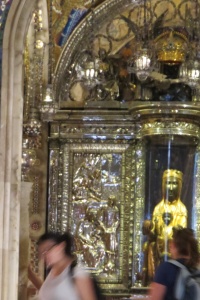 Many of our lovely group have expressed the same sentiments I felt as we reluctantly left this beautiful, vibrant city, much richer for the experience. 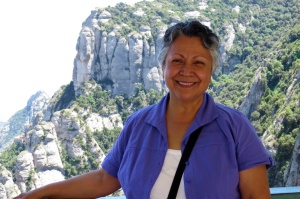 Nightcaps at the end of our day: 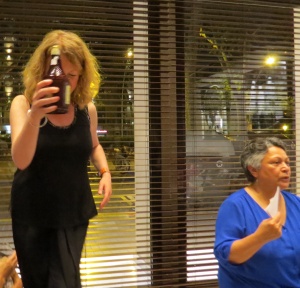 The Shadow of the Wind, by Carlos Ruiz Zafon

A book lover’s book, with a Cemetery of Forgotten Books (truly) in the Barri Gotic, a mystery, winds its way thru the back alleys of old Barcelona, with a central theme of the temptation of good over evil. And The Shadow of the Wind explores good, evil, and all the gray conundrums in between. Also a rollicking good ride!

”The Shadow of the Wind” opens in 1945 in Barcelona, bleak and still shattered by the Spanish Civil War. Throughout, in fact, the residue of the war’s fraternal horror is the grave thematic substratum beneath capers and mystifications.