This afternoon we lurched into the 20th century, possibly the most brutal period in Spanish history.

The century started with a weak monarch, Alfonso XIII, who kept Spain out of World War I (officially neutral) and domestically deepened the country’s economic crisis. Ultimately, he fell to a military “coup” (to which the King consented) and the country fell under the dictatorship of Primo de Rivera between 1923 and 1930. Primo de Rivera declared a state of war, abolished the Constitution and replaced local governments and police with military. 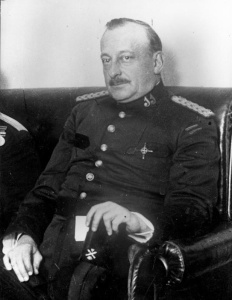 The country was deeply polarized, with the Communist party gaining strength even as conservative factions, in whom you would have thought Primo de Rivera might have found support, were a growing opposition party. In 1931, King Alfonso forced Primo de Rivero to step down and a “Second Republic” was declared and a new Constitution invoked. The people were deeply unhappy with the social and economic mess Rivero left in his wake.

Allegory of the Second Republic

By 1936 the tension in Spain was palpable and ordinary people lived in fear. The streets emptied, the shops were shuttered. The leftist Republicans, led by the Popular Front, mainly educated middle class and poor farm workers, were in power (supported by Russia) and the conservative Nationalists, mostly Catholic landowners and business leaders led by the Felange party (supported by Italy and Nazi Germany who eventually supplied them with munitions and soldiers) were in deep dissent. On the 12th of July, 1936, a group of Republican generals declared in Parliament a “pronunciamiento” – essentially a coup. The following day, Calvo Sotelo, a Nationalist leader, was assassinated, triggering the long-fomenting Spanish Civil War.

The war dragged on for over two years with as many as half a million killed and another half million fleeing the country.  It was a war of ideologies, a war against fascism.  The losers were the people of Spain, ordinary people struggling to live ordinary lives.

(For a fascinating sidebar on the Spanish Civil War, read the New York Times review linked at the top, The Mexican Suitcase, about the only four photojournalists reporting on the war from the front, getting news out of the country to the world.  After sending their negatives out of Europe via the underground, the films disappeared for decades….  I happened to see this fascinating exhibit in New York in 2010 at the International Centre for Photography.)

With Musollini in Italy and Hitler gaining power in Germany, the war against fascism spread across Europe and ultimately engaged most of the world. Spain, too, had a dictator in General Franco, and he was sympathetic to Germany, even though Spain was officially neutral in WWII. Franco repaid Germany and Italy for their aid in the Spanish Civil War with “volunteer” soldiers and civilian “volunteers.”   While the rest of the world trounced fascism and reshaped Europe and the Middle East, Spain was left with Franco.

General Francisco Franco had emerged as Nationalist leader late in the civil war. He was a strategist and opportunist who stepped in at the right time (for him), just as the Nationalists won the war. In 1939, he seized control of power and his dictatorship began. Republican soldiers were jailed or worse. 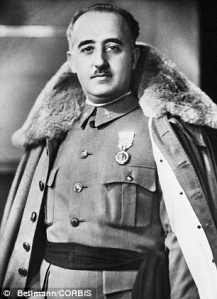 Which brings me to the Valley of the Fallen. In 1940, Franco, now in power, tried to rewrite history. He didn’t have the big personality of the other European dictators so he put his propagandists to work. He built a huge monument which he named The Valley of the Fallen, and to show how magnanimous a leader he was, he had all of the bodies of both Nationalists and Republicans moved to this unfathomably vast grave site (he knew only too well where all the bodies of the Republicans were originally located). He did this without the consent of the families and he used imprisoned Republicans as slaves to build the monument.

The monument dominates the landscape

Staggeringly huge crypt at The Valley of the Fallen

Franco led Spain, and the Spanish people endured austerity and domination, until he died in 1975 (they simply could not face another civil war).  He arranged that his body would be buried at the Valley of the Fallen.

Among the 40,000 bodies at the Valley of the Fallen, the only person buried there who wasn’t killed in the civil war is Franco himself.

In 1976, democracy in Spain was restored. It is interesting that the Second Spanish Republic, as a government-in-exile, had an embassy in Mexico City from 1931 until 1976.

In 2007, the Historical Memory Law was passed by the Spanish Socialist Workers’ Party government. The law recognizes the victims on both sides of the Spanish Civil War, gives rights to the victims and the descendants of victims of the Civil War and the subsequent dictatorship of General Francisco Franco, and formally condemns the Franco Regime.

On May 25th, 2015, just days before we arrived in Spain, local and regional election results were startling.  The traditional parties, the incumbent conservative People’s Party and the opposing Socialist party resoundingly lost the elections; Spain voted for new parties, mainly of the Podemos movement who campaigned  against government corruption and austerity measures.  It will be very interesting to see what happens in the November general elections.

Imagine, with all that history, stepping into that box, a Spaniard, and picking up the pencil and marking an X.