Virtually all 90 million Egyptians live along the Nile delta. 10% of these are Coptic Christians, the Byzantine Egyptians who were here before the Arabs first invaded in 641 AD (by the 10th century the majority of Egyptians were Muslim).  Coptic Christianity is unique to Egypt but closely related to Eastern Orthodoxy and there were many similarities to the cathedrals of Russia and Greece – the bearded priests, iconography and the worshippers who lined up to kiss and touch their namesakes.

We had a walking tour of the old Coptic area of Cairo through its maze of narrow winding streets with many cathedrals, churches and a synagogue. 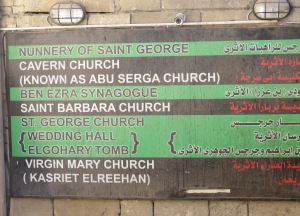 One of the cathedrals, Abu Serga, or Cavern church, was built atop a site where the holy family rested and a path walked by Christ was carefully preserved. (No photos allowed).  A map of the Holy Family’s journey into Egypt: 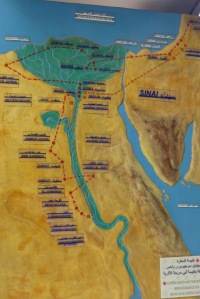 We visited another beautiful church, Al-Moallaqa, also known as the Hanging Church because it was built over a Roman ruin.

Its exterior courtyard is flanked by stunning mosaics: 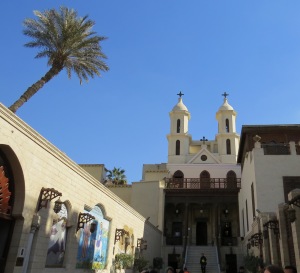 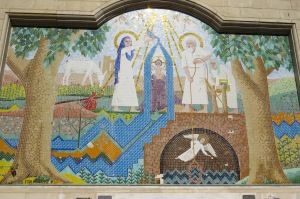 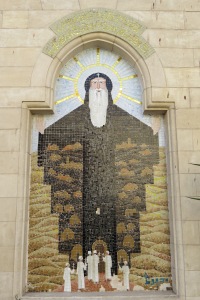 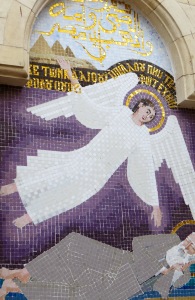 We covered our heads and entered the hushed sanctuary. 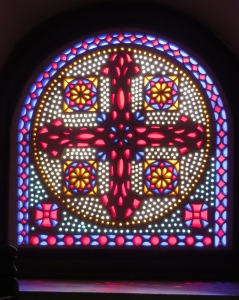 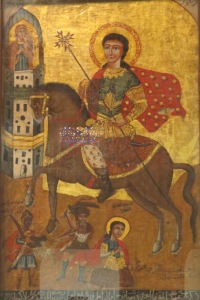 Outside again, a narrow street was lined with religious texts for sale. 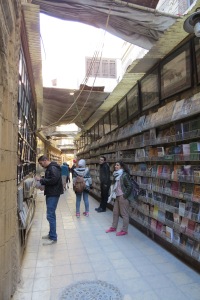 We also visited Ben Ezra Synagogue which is supported by wealthy Jews in Israel and the US who visit – there are few Jewish people living in Egypt now, having fled persecution at various points in Egypts complicated past.  As we sat in its cool interior, our guide extraordinaire, Waleed, attempted to unravel for us the knotted political/religious conflicts in the Middle East.

I came away with a better understanding but I won’t attempt to amplify it here.   I may be better equipped to give you a sense of some local opinion on Egypt’s current situation which is largely hopeful and optimistic.

However, because there was no political infrastructure in place, a vacuum was created and the Muslim Brotherhood was legalized.  It formed a political party with the heady name The Freedom and Justice Party and its leader Mohamed Morsi won the 2012 election.  Within a year, however, the MB’s injustices revealed to Egyptians the mistake they had made in electing Morsi and the military was also alienated.  What followed was not so much a military coup as a handing over of power from the MB to the people.  An election followed in 2012 in which Al Jazeera reported a “landslide” win of 93.3% of the vote to former army chief Abdel Fattah el-Sisi.  The opposition leader conceded defeat.  In the years following his election, though not perfect (ask Mohamed Fahmy), the country is making great strides under Sisi, who seems to have Egyptians’ best interests at heart, building highways, improving access to medical care and education, etc.  Further democratic elections are promised for 2018.

Meanwhile, ISIS and other Islamist militants moved into the Sinai Peninsula.  They have focussed their attacks on the military and police but have also brutally attacked both Coptic Christians and the Sunni (moderate) Muslim majority in Egypt.  Just before we arrived in Cairo, on December 11, 2016 during Sunday service, a suicide car bomb struck St. Mark’s Cathedral, Coptic headquarters in Cairo and home to Pope Tawarose II, killing 25 and wounding dozens of others.

There was no evidence of the attack on our Saturday afternoon tour of the Coptic area other than a Manhattan-like police presence which existed all over Egypt, ensuring our safety.

Finally, on a lighter note, an island of modernity floated in a sea of ancient architecture, a solid marble Metro station: 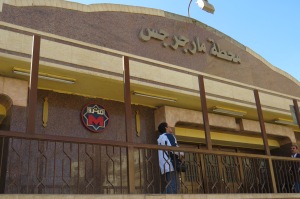