Egypt’s golden era, from about 1570 to 1070 BC, when Egypt was at its most rich and powerful.  Pharaohs who ensured the love, fear and respect of their people  by commissioning some of the most glorious and triumphant art and architecture the world has ever seen.

Amenhotep I was the second leader in this period, from 1525 to 1504 BC.   A warrior, he expanded Egypt’s domination through battles in Nubia, Mesopotamia and elsewhere.  Under his reign, Egypt was polytheist though Amenhotep was most closely associated with the god Horus.  He greatly expanded the Temple Karnak in Thebes and was the first Pharaoh to separate his tomb from his mortuary temple, setting a trend in the royal funerary monuments to come.

Queen Hatshepsut was part of this dynasty, only the second female ruler and the most successful.  More on her to come.

Next, Egypt took a brief sidestep.  King Akhenaten, with his beautiful wife Nefertiti, proclaimed there was only one god – Ra, the sun god – and moved his capital city from Thebes far south to Amarna.  He was unable to maintain followers beyond a single generation, and when he died and his young son Tutankhamun stepped into his role with various consorts, he rejected monotheism and declared devotion to the gods of the previous generations.  Most of Amarna was destroyed and he swept back into the Karnak Temple in Thebes.

Later, Ramesses II (or Ramses the Great) reigned over Egypt from approximately 1279 to 1213 BC, likely the longest reigning Pharaoh who lived into his 90’s.  One of the most powerful and successful Pharaohs, he spent his early life devoted to building monuments and temples to honour himself.  Later he expanded Egypt’s empire through several battles.  His “conquering” of the Hittites, commemorated by his building of the Abu Simbel temples, was political spin – the Hittites actually signed a peace treaty and could have defeated the Egyptians because they had begun using iron weaponry.  Perhaps the great diplomatic skills can be attributed to Nefertari, a powerful royal wife who could read and write hieroglyphics in a time when very few could.

It was to this, Abu Simbel, his most important temple complex, that we were travelling today.  This is one of the temple complexes that was saved during construction of the Aswan dam.  In a modern engineering feat, it was moved to its present site near the Sudan border on Lake Nassar.

We left before dawn, and witnessed the sunrise over the Sahara Desert. 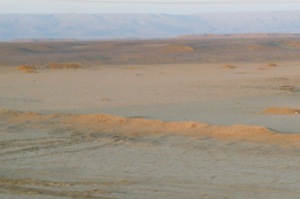 Abu Simbel, two temples, were built in 1244 BCE to honour Ramses II and Nefertari, in surely an unparalleled demonstration of power, and of ego.  Photographs cannot convey the size of these temples.  You have to see them for yourself!

Known as the “Temple of Ramesses, beloved by Amun.”

The temple interiors were equally impressive but photography was not permitted.  Here a couple of images from the net: 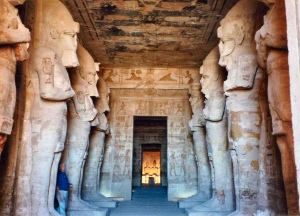 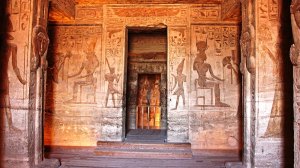 The paintings in the interior of Nefertari’s tomb are considered to be one of the finest achievements in ancient Egyptian art.

We have seen several other colossal images of Ramses II, such as this one at Memphis:

Another was discovered only days ago, near Cairo:

After a quick cappuccino, during which we were entertained by the sparrows enjoying a sugar bowl, we headed back to Aswan to turn the page to our next adventure, boarding our cruiseship, the Esmerelda. 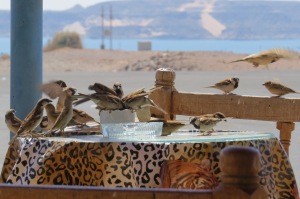