Named for St. James, the patron saint of Spain who was believed to have travelled in Spain, this city of 6 million teems with some of the friendliest, warmest people I have ever come across.

On our first day here today we were meant to rest after a long flight, but we opted to defer rest in favour of a free day in Santiago.  We headed out to the Museo Nacional de Bellas Artes about a block from our lovely, aptly situated boutique hotel.   There were several interesting exhibits and some classical landscapes and portraits by Chilean artists, but the building itself is an architectural beauty and marvel considering Chile is the most seismic country on Earth.

Next, a beautiful fixed price lunch, starting with our first empanadas, with new friends in an eclectic area not far from our hotel. 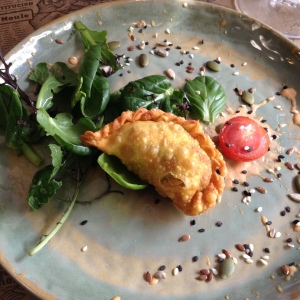 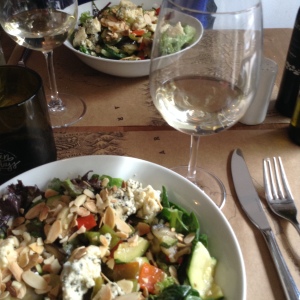 We wandered the city to get oriented and later, went to a nearby restaurant for our first group dinner, which began with the country’s national drink, a Pisco Sour, followed by a delicious meal. Next morning, a view from my hotel room which overlooks Parque Forestal with the Andes in the distance: