We have a free day in Malaga, a gem of a city of about half a million people on Spain’s sunny, southern coast.

This cultural hub has 30 museums, including outposts of the Centre Pompidou of Paris, the Russian Museum of St. Petersburg and the Thyssen Museum of Madrid.  Perhaps not surprisingly, there are two museums in this birthplace of one of the most famous artists in modern history.

“I was born of a white father
and a small glass of Andalusian eau de vie
I was born to a mother the daughter
of a fifteen year-old girl born in the Percheles of Málaga
the handsome bull who sired me with his forehead
crowned with jasmine”. Pablo Picasso. 4 May 1936.

Pablo Picasso’s father, Ruiz, was himself a painter and art teacher who specialized in naturalistic depictions of birds and other game. Picasso showed a passion and a skill for drawing from an early age. According to his mother, his first words were “piz, piz”, for lápiz, the Spanish word for “pencil”.  From the age of seven, Picasso received formal artistic training from his father in figure drawing and oil painting. Ruiz believed that proper training required disciplined copying of the masters, and drawing the human body from plaster casts and live models. His son became preoccupied with art to the detriment of his classwork. 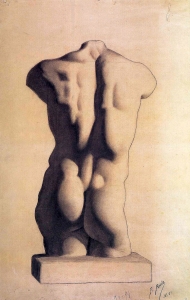 His transformative piece, made at age 26,
is thought to be this, in which he uses the
mask as a symbol for the first time,
Les Demoiselles d’Avignon: 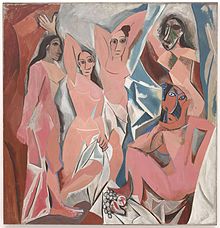 It was received with shock and revulsion.

The recent film, Never Look Away, is a fascinating look at the development of an emerging modern artist (in that case, Gerhard Richter). The trailer:

There is so much more to Malaga and the stunning Costa del Sol!

I packed a lot into our free day here, starting with a visit to the gorgeous Hammam Al-Andalus, in a building with all the tile work and intricate woodwork of a Moorish alcazar.  I had a salt scrub and massage followed by the steam room and the pools.  Here is just one of the four pools, each at a different temperature.

Nearby was the Thyssen Museum which had stunning paintings from the Spanish Romantic period, intricately detailing the clothing of flamenco dancers and matadors.  Bejarano was my favourite artist.

I wandered the narrow streets and shops as I headed toward the Roman amphitheatre.

I knew there was a popular restaurant nearby and by this time I was hungry.  It was at the amphitheatre and Alcazaba, which towers above on the hillside. 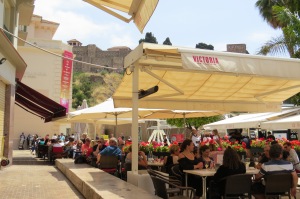 Look who’s coming to the Cervantes Theatre on June 29th:

The Picasso museum was right around the corner, and I spent quite a bit of time there.  They have an impressive collection from most periods of his life and work and an exhibit about his poor wife, Olga.

I strolled back toward the hotel as I still wanted to visit the Pompidou museum and the beach.  The Pompidou is a cultural landmark at the entrance to the harbour, literally steps from our hotel.  The gallery is laid out thematically and there were quite a few important modern artists represented, including a brilliant mural by Miro, “homage to the Catalan people” made by Sauro during Franco’s rule, Chagall’s “The Fall of Icarus”, and a Kandinsky painting made just after he left the Bauhaus school and Germany preceding the second world war. 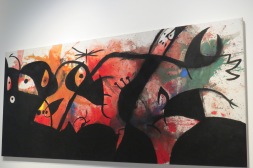 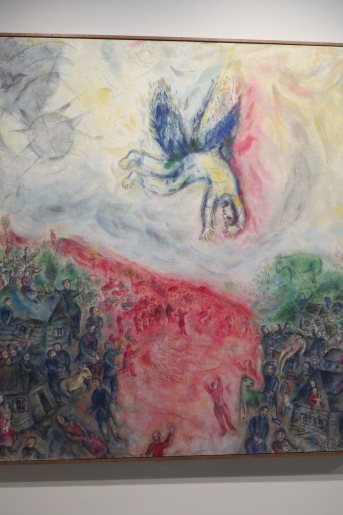 The beach, “Malagueta,” was only a steps from the gallery, and dipping my feet in it transported me back to the spa where I started my day.  I stood in the Med for awhile and then sat on the beach enjoying the view and the people-watching.

I ran into new friends in time for a fun dinner.  I really could not have asked for a more perfect day. 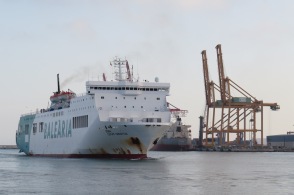 With a little more time (and I hope I will have the chance to return), I would do this spectacular hike.

Another claim to fame for Malaga:  Antonio Banderas was born here.