We had a tour of the science museum today.   I was sorry the opera house was dark tonite. 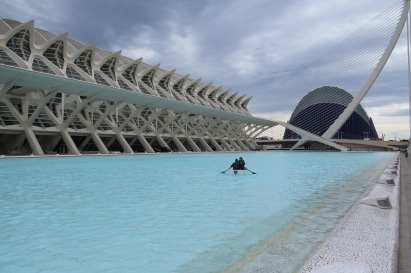 In 1981, Calatrava was awarded a doctorate in the department of architecture
Eidgenössische Technische Hochschule in Zurich, Switzerland, after completing his thesis on “The Pliability of three-dimensional structures.”  Calatrava explained that he was particularly influenced by the work of the early 20th century Swiss engineer Robert Maillart, which taught him that, “with an adequate combination of force and mass, you can create emotion.”

He says that “movement gives an added dimension to form. It makes form a living thing. Instead of thinking of a building as something mineral, like a rock, we can start to compare a building to the sea, which has waves that move, or to a flower whose petals open in the morning. This is a new, more poetic understanding of architecture.”

New, yes, but perhaps with a nod to Antoni Gaudi, whose nearby Barcelona architecture relies so heavily on nature as its inspiration.  On the side of a cathedral, a slug with its slime trail, by Gaudi,

or a locust, as in this Calatrava building, the Palais des expositions et des congrès de Oviedo, I had seen previously in Oviedo, Spain.

Calatrava is not without his critics, or detractors, or lawsuits.  His epic project delays and cost overruns are notorious, matched only by his awards and honours (Wiki lists 22 honourary degrees from around the world).  Reaction to the Oculus transportation hub in lower Manhattan exemplifies the dichotomy.

Jimmy Stamp of The Guardian wrote: “I despised the new World Trade Center transportation hub before I even saw it. It’s $2bn over budget, had construction problems and design compromises, it’s seven years late and still incomplete…but when I was standing on the marble floors in its enormous, gleaming central concourse two stories below street level, staring up at a clear blue sky between bone-white ribs vaulting 160ft over my head, I, like Jonah in the whale, repented – at least for the moment….The Oculus presents a more optimistic vision, one based less on present realities and more on future possibilities. Less Blade Runner, more Star Trek. By the time we get to that future, whichever one it may be, the delays and the cost and the controversies will be forgotten, but we will be left with a luminous great hall in the heart of downtown New York.”

If your city needs to be lifted up, and NYC at the World Trade Centre site certainly did after 911, do you choose cost-saving concrete, or soaring inspiration and vision? 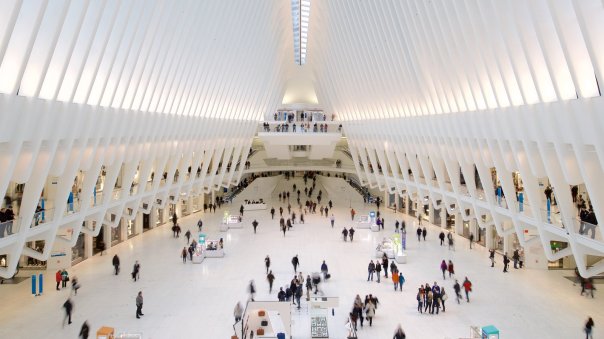 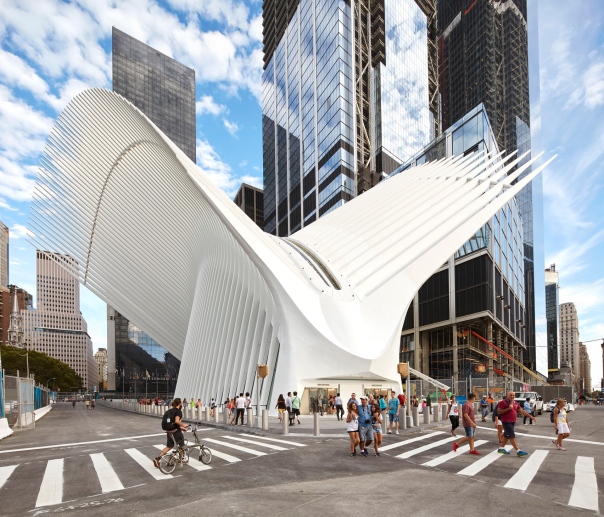