1   Was this the face that launched a thousand ships
2 And burned the topless towers of Illium?
3 Sweet Helen, make me immortal with a kiss:
4 Her lips suck forth my soul, see where it flies.
5 Come Helen, come, give me my soul again.
6 Here will I dwell, for heaven be in these lips
7 And all is dross that is not Helena.
8 I will be Paris and, for love of thee,
9 Instead of Troy shall Wittenberg be sacked;
10 And I will combat with weak Menelaus
11 And wear thy colours on my plumed crest;
12 Yea, I will wound Achilles in the heel
13 And then return to Helen for a kiss.
14 O, thou art fairer than the evening air,
15 Clad in the beauty of a thousand stars;
16 Brighter art thou than flaming Jupiter
17 When he appeared to hapless Semele,
18 More lovely than the monarch of the sky
19 In wanton Arethusa’s azure arms,
20 And none but thou shalt be my paramour.

The history at Troy puts Helen, the most beautiful woman in all of history, front and centre.  But her story starts in Sparta, near the ancient site of Mycenae, on the Peloponnese peninsula in Greece.  Like so many ancient Greek stories, the lines tend to blur between the mythological and the real.  But there is much to support the existence of Helen and events at Troy, in archaeology.

Stories of Helen link her beauty with violence.  The story of the mythological Helen began with an act of vioence: the rape of her mother, Leda, by Zeus, who had transformed himself into a swan.

Poem Leda and the Swan, by W.B. Yeats:  https://www.poets.org/poetsorg/poem/leda-and-swan

According to historians, Helen, the girl, aged 13, was raped by 70-year-old Theseus, King of Athens, and then forced into marriage.  It is hardly surprising, then, that Helen fell in love with the handsome young warrior, Paris, the second son of the King of Troy, when he swept in, fell passionately in love with her, and the two fled to Troy, a city controlled by the Hittites.  Helen was an aristocrat, a consort ruler of Sparta, and would have had disposible wealth and owned fertile land.  The women of her day were in charge of religion and mysticism and all of this suggests Helen had a lot of power and in all likelihood went to Troy of her own volition.  This also explains why, on orders from her husband who was away at sea, Greece immediately dispatched a fleet of ships to follow Helen and Paris to Troy with orders to bring Helen back.

At Troy, Helen appeared to be pulling all the strings, Homer said she spent a lot of time weaving tapestry with a golden spindle.  She walked around the Trojan horse three times while tearing at her clothes, likely drawing attention to it by the Trojans.  The City of Troy’s fate was sealed.

According to Homer, Helen had a perfect view from Troy of Paris and Manaleus fighting to the death for her, what beauty, terrible beauty, said Homer.  Paris was dragged to the Greeks and they were about to kill him, but Aphrodite covered the field in mist and brought Paris back.  Helen didn’t want to speak to Paris, he’d dishonoured her, but the more Helen poured scorn on Paris, the more he wanted her.  The fighting raged on and Paris was eventually killed with a poisoned arrow.   Meneleus wanted to kill her, but when he saw her, all he wanted was to have her back.

Helen and Meneleus returned to their Spartan palace.  When Trojan visitors later came to Sparta, she dropped poison into their drinks to make them forget what she had done.  Helen still controlled things, but her golden age of heroes were about to be extinguished.  Archaeological evidence shows that the Hittite empire collapsed, Troy suffered an earthquake, Sparta a fire and the Dark Ages began.  But Helen lived on, worshipped as a goddess.  Homer made her the excuse for a war in which men by the thousands were killed.  Her tomb was never found, but the area is known, and what was found there by archaeologists?  A bronze age golden spindle.

One could imagine a beauty like Helen wearing the gold jewelry which formed part of the treasury discovered at Troy, now housed at the excellent new Troy Museum we visited today. 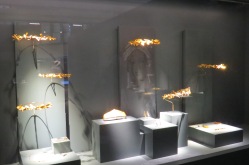 A statue of Aphrodite, the goddess of beauty, found at Troy:

Thousands of loom weights, spindles and dye production tools have been discovered at Troy, suggesting an extensive weaving production and trade, just as Homer had referenced. 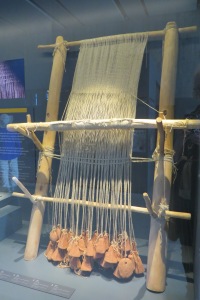