On our second day in Kusadasi we visited Ephesus.

This magnificent city-state, containing one of the Seven Wonders of the Ancient World, was largely built by the ancient Greeks but in fact, like Pergamon, the archaeologists’ digs peeled back the layers like the skin of an onion, revealing the many civilizations that have come and gone at Ephesus.

The earliest find at the site dates to the late 7th millenium BCE, the early Chalcolithic period, in other words, 9,000 years ago.  It strikes me that the Mother Goddess of this age found at Ephesus, now in the Ephesus Archaeological Museum (below left), is very similar to the fertility goddess, the Venus of Willendorf, that I saw in Vienna’s Natural History Museum which dates back to at least 22,000 BCE. 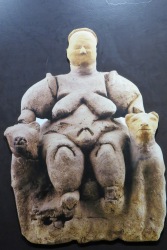 At some point in the 11th century BCE, the west coast of Turkey, including the city of Ephesus, was conquered by the Greeks in what is now known as the Ionic civilization (identified by the decoration at the capital) that represents a ram’s horns).

This bronze statue of an Egyptian priest from the 6th century BCE found on site suggests very early communications between Egypt and Ephesus.

Shortly after 550 BCE, Lydian King Kroisos conquered the city, but not for long.  In 546 BCE, the Persians took the city and maintained control until Alexander the Great took the city in 334 BCE.

During this Hellenistic (Greek) Period, the city of Ephesus was extensively reconstructed.  A 9 km fortification wall was built around the entire city, enclosing two main areas.  The Upper Area comprised the political and residential area including a small theatre for political debates. 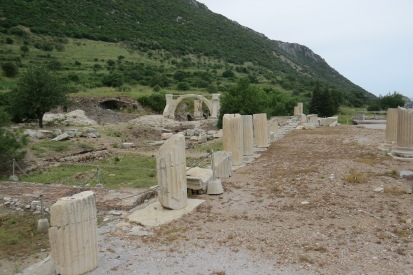 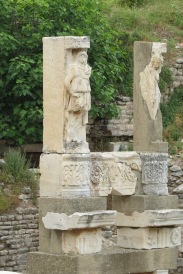 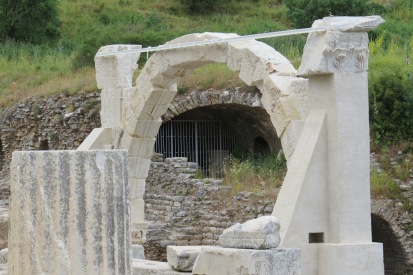 The Marble Road connected the upper and lower areas. 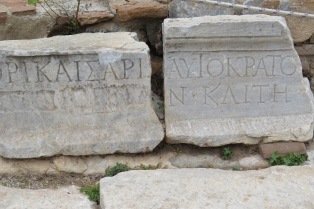 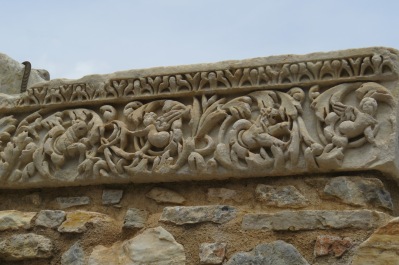 The Lower Area was the cultural and mercantile area which included a theatre, agora and stadium. 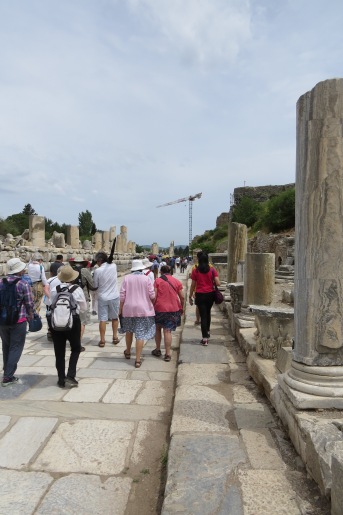 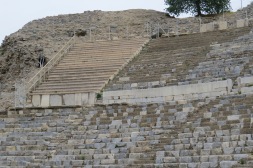 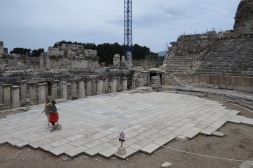 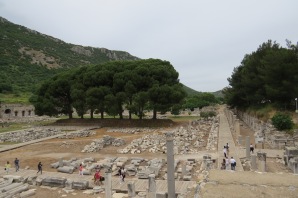 The centerpiece of the entire site today is the Lower Area 3-storey Library of Celsus, which was the third largest library in the world. 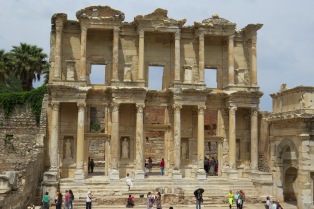 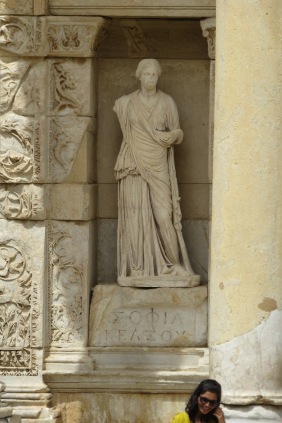 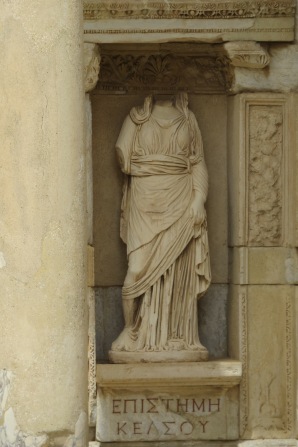 In 88 BCE when Romans attempted to take over the city and impose a tax, all Italians were sentenced to death and 80,000 people were violently murdered in a single night.

When the Apostle Paul preached here between 52 and 55 BCE, he was confronted by a determined pagan cult and the Jewish community and was ejected from the City.  He carried on to Corinth where he delivered his scolding “Letters to the Corinthians”.

In 33 BCE, Antony (below, left) and Cleopatra spent the winter in Ephesus planning their campaign against the Roman, Octavian.  Of course, they lost that battle and the Octavian took the name and title Emperor Augustus and made Ephesus his headquarters and the capital of Asia.  There were purposefully built construction projects which were used as political tools.

The Romans retained power until about 270 AD when a catastrophic earthquake and Gothic raids sent the city into a severe decline.

Many of the discoveries at this site date to Roman times.

Just off the road connecting the upper and lower areas was the Temple of Artemis where both the exquisite 1st century AD statue of Artemis (below, left) was discovered as well as the 2nd century AD replica. 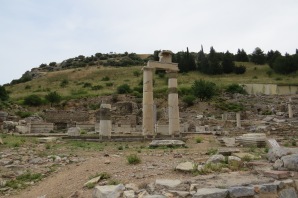 The Nymphaem fountain building was donated by Tiberius Aristion and his wife in 114 AD.  Originally, a 2-storey facade surrounded the fountain on 3 sides and Trajan stood, with a globe under his foot stood above the water outlet. 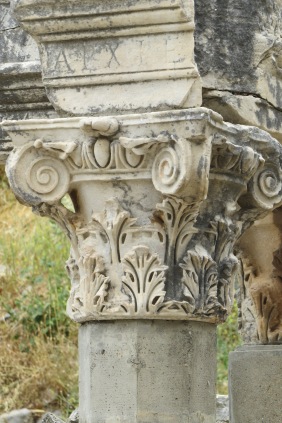 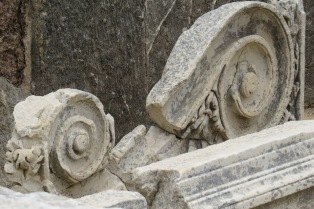 A special exhibit at the site is a collection of stencils and mosaics from some of the Roman mansions found at the site.   It seems like the ultimate challenge for an archaeologist, patching together equisiite marble and mosiac fragments, a reality jigsaw puzzle. 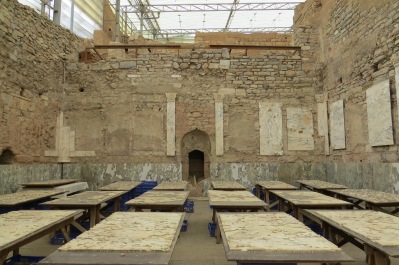 One of the typical upper middle class homeowners was C. Flavius Furius Optus, a priest and municipal counsellor.  His walls were decorated with stencils and frescoes.

Other homes had wall frescoes and mosaic floors.  Medusa, my least favourite godess, makes an appearance. 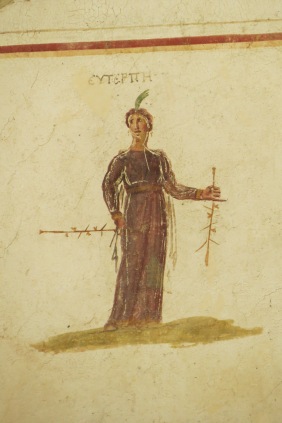 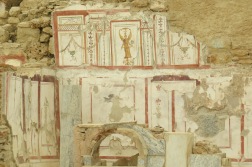 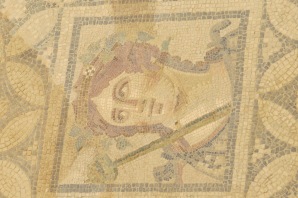 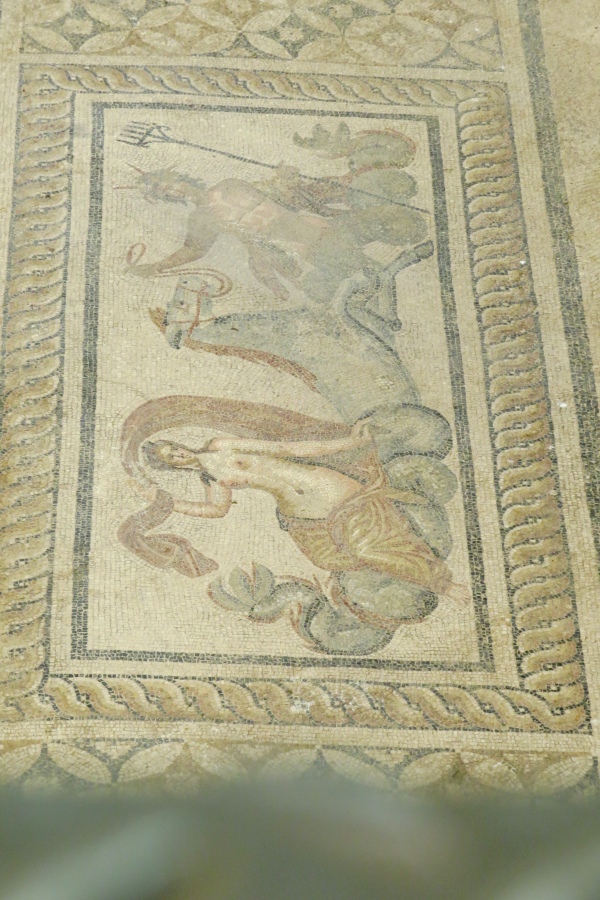 Other beautiful Roman statuary are protected in the museum including statues or busts depicting Aphrodite, Artemis, Zeus, Androclus, a resting warrior and others.

An ivory frieze was found in one of the terrace houses. 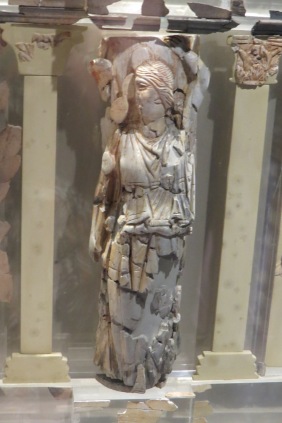 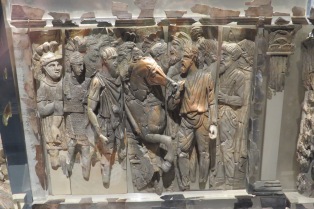 Head and arm of what must have been an enormous statue of Emperor Dimitrius.

Impish little Eros, doesn’t he look like a whole lot of mischief?

One of the Seven Wonders of the Ancient World, this temple is the most important building at Ephesus but the current view does not look so impressive today.  It is notable that all religions are represented here (a church, mosque and ancient castle stand in the background) 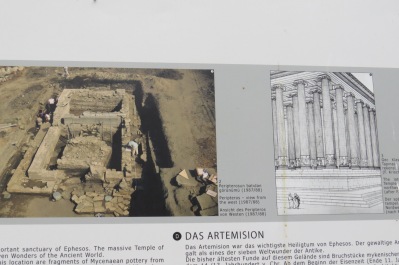 The Romans retained power until about 270 AD when a catastrophic earthquake and Gothic raids sent the city into a severe decline.

A pillar top makes the perfect home for a growing stork family.

The city experienced a resurgence during Byzantine times and several major churches were built.  A statue of Proconsul Stephanos dating to the 6th century was found on the site. 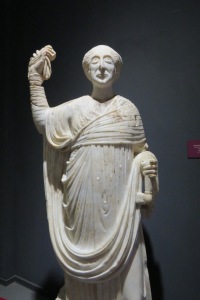 Shrine of the Blessed Virgin

This was the period when the Shrine of the Blessed Virgin we were to visit was installed at what is believed to be the last home of Mary.  It was written that Jesus entrusted St. John to take care of his mother for the rest of her life, saying “here is your mother.”   John’s tomb has been found at Ephesus.  John was given responsibility for Asia Minor and likely came here after persecution in Jerusalem.  Further evidence put forth at the site states:

“Catherina Emmerich was an invalid and had never left Germany.  In her visions, she described with amazing accuracy the hills of Ephesus and the house where she saw the Blessed Virgin spend her last years.  Accordingly, two scientific expeditions were organized in 1891 and they found this place in perfect and identical correspondent with the indications of Catherina Emmerich.” 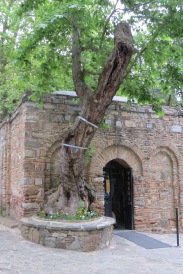 Followers leave messages for Mary.  It reminded me of the John Lennon wall in Prague and the letters to Juliet in Verona. 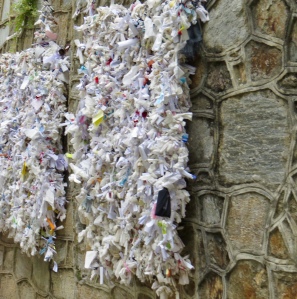 Excavation of this whole complex of Ephesus has been ongoing since 1985, but estimates suggest that 80% remains buried.  It is certainly the largest archaeological site I’ve ever visited and it is easy to perceive the vastness and importance of the city-state in ancient times.