Solitaire, as its name suggests, is one of those out of the way places that never wanted to be popular.  Nothing more than four corners in the middle of the desert at the junction of C14 and C19, the major roads in the Namib-Naukluft National Park, it has a gas station, a general store and, perhaps most importantly, the only tire repair shop between Windhoek and Walvis Bay.  That Percy Cross, a burly Scot looking for tranquility, decided to stop here, bake apple pie and rename himself “Moose McGregor” seems highly improbable, but that’s exactly what he did.

And he made the best apple pie you’ve ever tasted, still served straight out of the oven.

Moose’s tranquility went out the window, but as one of the beloved characters of this land, we think he wasn’t disappointed.  Solitaire, too, belies its true identity – nothing like the reclusive, disinterested place one might assume from its name, it has become the best kind of neighbour.   The two farms that make up Solitaire, the businesses, and other area land holdings, are now part of the 45,000-acre Solitaire Land Trust, focussing on habitat preservation and conservation for the area’s wildlife.  Solitaire’s own fame has grown since it became the focus of the eponymous Dutch novel about author Ton van der Lee’s stay here.  Sadly, Percy Cross died in 2014 at the age of 58.  Solitaire is a diamond in the rough, and we think Percy was too. 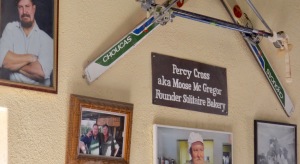 Revivified after our pie and fuel tank refilled, we crossed the canyon of the Kuiseb River right on the Tropic of Capricorn to make our way to Moon Valley.

The Tropic of Capricorn is the dividing line between the Southern Temperate Zone to the south and the tropics to the north. It is the southernmost latitude where the sun can be seen directly overhead.  (The Northern Hemisphere equivalent of the Tropic of Capricorn is the Tropic of Cancer).   When this line of latitude was named in the last centuries BCE, the Sun was in the constellation Capricornus (Latin for goat horn) at the December solstice, the time each year that the Sun reaches its zenith at this latitude. The word “tropic” itself comes from the Greek “trope (τροπή)”, meaning to turn or change direction, referring to the fact that the Sun appears to “turn back” at the solstices.

The line’s position is not fixed, but constantly changes because of a slight wobble in the Earth’s longitudinal alignment relative to its orbit around the Sun.  The line also crosses the Andes in Argentina and Chile. 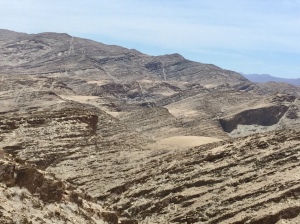 We drove through what was once a mountain range.  Erosion has reduced the Moon Valley to rolling, low-lying hills, and a lunar-like landscape of a thousand colours.  For the past two million years, the Swakop River and its many tributaries flowed through this valley, giving it life and shape.

The landscape had become so harsh it seemed it could no longer sustain life.  There was the beauty of the vast, open sky, but after passing through Moon Valley, the harsh environment seemed to carry on forever. 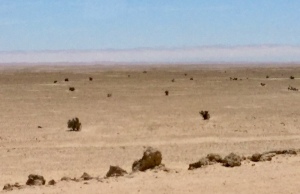 But as we neared the coast, a line of mist appeared on the horizon and a covering of mossy green lichens coated the sand.  Unique in the world, there are over 100 types of lichen in this desert.  This area is also the source for those tiny air plants that are sold everywhere – plants that don’t attach themselves to anything and require only a misting of moisture for water.

We finally arrived at the coast and pulled into the former British colonial naval port town of Walvis Bay.  We drove toward the lagoon, where I began watching hopefully for pink. 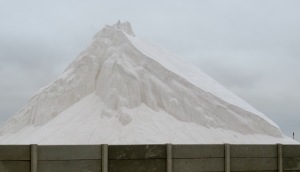 We passed by a massive sea salt production facility and began to understand that this was why flamingos were here, and we got answers to a few other questions, too.   The algae and crustaceans they eat thrive in high saline or alkaline conditions.  According to Curiosity.com, flamingos make themselves at home on some of the most toxic, caustic bodies of water in the world. The water they prefer is often flesh-strippingly alkaline, and the ground that surrounds the shores absorbs those harmful properties. The scaly skin on their legs is tough enough to handle it, but their softer flesh is a little more at risk.  That’s why they sleep standing up.

Speaking of standing up, two scientists actually did an experiment with (already) dead flamingos and found that the joints in flamingos’ legs lock, allowing them to stand securely on one leg without losing their balance or using their muscles to stand.  Even dead, they remain standing when one leg is in the locked position.

Lesser and greater flamingos flock in large numbers to pools along the Namib Desert coast, particularly around Walvis Bay. They’re excellent fliers, and have been known to migrate up to 500 km overnight in search of proliferations of algae and crustaceans.  We must have seen over a thousand of them, along with a handful of pelicans and some plovers.  There were lots of colourful jellyfish here, too.

The greater and lesser flamingos are best distinguished by their colouration. Greater flamingos are white to light pink, and their beaks are whitish with a black tip. Lesser flamingos are a deeper pink – often reddish – colour, with dark-red beaks. Flamingo feeding is endearing, if not somewhat comical, worthy of two very short YT videos.

After a walk on the promenade along the mansion-lined lagoon, we continued on for a short drive on paved road to the former German colonial town of Swakopmund for two nights.