Today, we’re paying a visit to the Cheetah Conservation Fund in central Namibia.

“A cheetah is a cross between a lion and a panthress, or a panther and a lioness.”
– Aristotle

“It hunts but with a single bound
Flying on four outsized legs
Of all the wind’s offspring, it is the resplendent one
Trailing its tail on the ground
It clings to the neck of its prey
Like the embrace of a spurned lover  ….”
– Ibn al-Muʿtazz

“It is said that if a Cheetah has a difficult pregnancy, any male cheetah that sees her will take care of her and share the fruits of his hunt. When she is ready to give birth, she secludes herself in a place that she has prepared and remains there until she teaches her young how to hunt.” 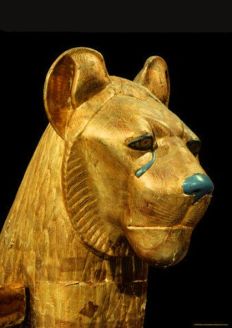 Deriving from Sanskrit (चित्रय), the Cheetah’s name means “variegated, adorned, painted.”  Over 2,000 spots form patterns unique to each animal.  The Cheetah wears its heart on its face in the pattern of tears falling heartbreakingly from its eyes.  This feline is not aggressive toward humans and as early as the Ancient Egyptians, they have been adopted by humans for use as hunters and pets.  The female Pharaoh Hatshepsut, on her anthropological mission into the Land of Punt (1507–1458 BC), brought the Cheetah back to her court and eventually the cat slunk into Egyptian symbology, explaining the statue shown above that I saw in Egypt, found in Tutankhamen’s tomb. 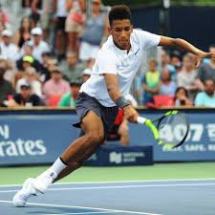 The Cheetah is the fastest land animal on the planet.  Capable of accelerating up to 112 km/h in 100 m, they execute short, explosive bursts of speed, rapid acceleration, and have the ability to execute extreme changes in direction while moving at high speed. They would make amazing tennis players!  Like young Canadian tennis star, Felix Auger-Aliassime, Felix the Cheetah!

The gentle Cheetah cannot roar because of a sharp-edged vocal fold within the larynx.  Unlike other big cats who are nocturnal, she hunts by day.  Her claws don’t retract, more like canine claws than feline.  She is compassionate in her killing, she chases down and trips the animal (mainly Antelope), immediately suffocating it with a bite to the throat from her deeply embedded canine teeth.

In 1969 author Joy Adamson, of Born Free fame, wrote and illustrated “The Spotted Sphinx” and “Pippa’s Challenge,” biographies of her pet cheetah Pippa.  She rehabilitated Pippa and raised her as a pet.   Pippa had four litters in her lifetime.

As of 2016, the global cheetah population had been estimated at approximately 7,100 individuals in the wild. Several African countries have taken steps to improve cheetah conservation measures.

In Namibia, the CCF’s International Research and Education Centre is a renowned research center for conservation programming and education that reaches thousands of farmers, tens of thousands of students and hundreds of thousands of online supporters worldwide.

Part of their program rescues injured or orphaned cheetahs and returning them to the wild.  Some cubs first field runs:

One of their most interesting and successful projects has been getting local farmers onside.  Because Cheetahs hunt by day, farmers blamed Cheetahs as the chief threat to their flocks and their income and would kill any who came near.  To deal with the problem,, CCF breeds Anatolian shepherd and Turkish Kangal dogs, breeds that are national symbols in Turkey and for millennia have guarded livestock against wolves and bears in mountainous central Turkey. 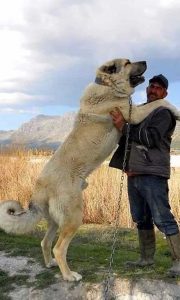 The dogs are placed with Namibian farmers as puppies. They bond with the herd and use their imposing presence and loud bark to scare away potential predators, including the Cheetah.   Weighing up to 150 lbs, the Kengal, a natural shepherd, is up to the task. 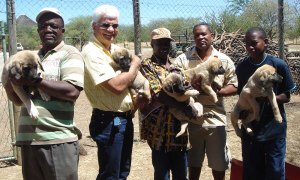 The program has placed more than 400 canines in ranches across Namibia.  Livestock loss has been reduced by 80 to 100 percent and farmers now understand the need for conservation and now protect the Cheetah.

We arrived at CCF just in time to see them fed.  A delicious banquet of raw donkey was laid out.  The appearance of the round bowls of donkey mreat meant feeding time to the cheetahs and they began to pace and lightly growl in anticipation.

These females are not able to return to the wild because they were adopted as cubs before their mother could teach them how to hunt.  They are highly ideosyncratic and have to be separated from the rest, kept only with other cheetahs they will tolerate.  This is reality reality not reality tv, but can be just as juicy:  each female has its own BFFs and arch enemies.

They each feed in their own way.  Some attack their food, using both front paws on the ground to balance them, devour their meat and walk away.

Aurora, however, likes to put both paws into the bowl, tipping it until she seizes it in her mouth and takes it away, jumping up on the roof to devour her food privately. 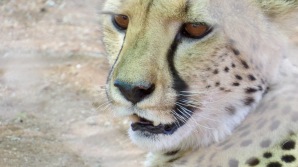 Other cheetahs, mostly male, are more affable and can live on the farm outside of cages.  We were taken on a game drive to see these animals.   It was hot, 38 C in the shade, so the animals were docile beneath trees.  It was easy to see their reticulating claws. 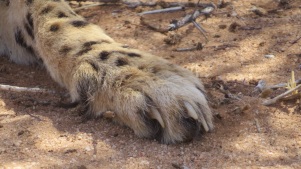 Polly is the elder statesman at age 18.  She is recognizable by her thicker tear trail pattern on her face.  These animals hadn’t yet been fed and she was alert, watching for the white pickup truck that meant dinner is served. 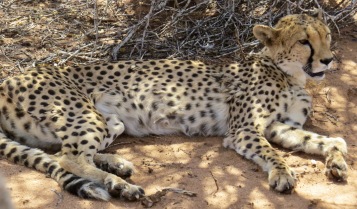 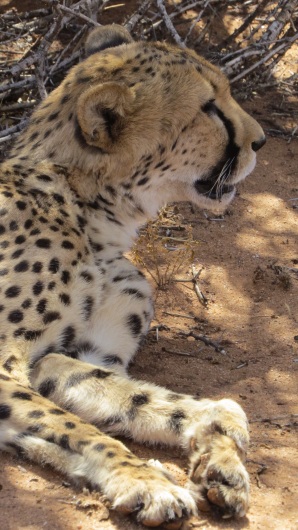 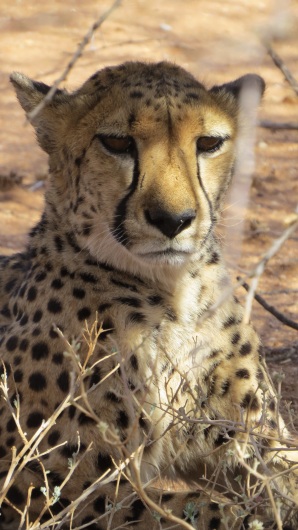 Darwin finally emerged from his enclosure for a drink of water.

We had a tour of the facility and were impressed with the scope of the work being done here:

Since the program was founded, the wild cheetah population in Namibia has doubled.

All of this means a large staff and costs a lot of money.  The Founder and Director, Dr. Lori Marker, a zoologist, travels the world doing fundraising.  They have an Ottawa bureau.  If you would like to donate, please go to their website, here.