Chacma Baboon
Status:  Non-threatened, but may become so 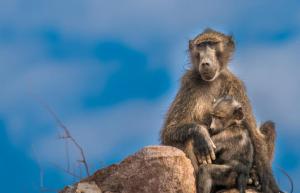 This largest species of monkey has a distinctive dog-like head.  It’s fascinating to observe their behaviour.  They live in large troops and have a complex, rigid social structure with a matriarchal lineage and plenty of inter-troop movement by males seeking social dominance.  Female ranking within the troop is inherited through the mother and remains relatively fixed, while male ranking is often in flux, especially when the dominant male is replaced. Chacmas are unusual among baboons in that friendships form not with members of the same sex but with unrelated adult males and females.

With a highly organised defence system, the only predator that seriously affects them is the leopard, which will try to pick them off at night, whilst they are roosting in trees or cliffs.  They sleep in large groups and have a distinct synchronized morning dispersal system.  Dispersal will be initiated by a single individual, and at least five followers must be recruited for a successful dispersal initiation. 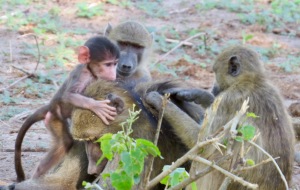 Orphaned baboons whose mothers have disappeared or died are adopted and cared for by both mals and females,  sleeping close to the infant, grooming and carrying it and protecting it from harassment by other members of the troop. 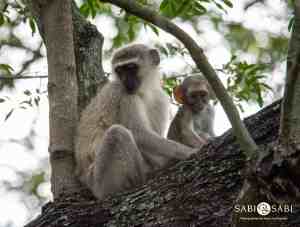 The vervet is probably the world’s most numerous monkey and inhabits the savannah and woodland, spending most of its time on the ground.  The vervet’s light grey coat, black face and white forehead band are distinctive – as are the male’s garish blue genitals. 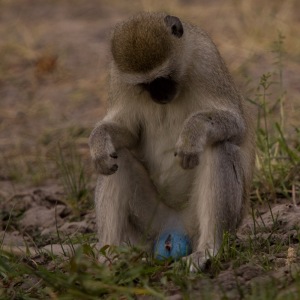 Vervets live in troops averaging about 25 animals and are found only around the narrow belts of woodland beside the Orange and Kunene rivers, and in the lush areas of Mahango and the Caprivi Strip.  They stay in the same troop for life.

Usually, the female Vervet monkeys do not have a lot of mates. Throughout their life, they have a small number of mates; males on the other hand have several mates during their lifetimes. Though, there is not a lot known about how the Vervet monkey reproduces. It is known that usually a female will give birth once a year to one young.  Most females love to actively take a huge amount of time raising the babies.

Vervets are active during the day and roost in trees at night. They eat mainly fruit and vegetables.

We saw them in Mahongo and Chobe parks, but the baboons were far more photogenic. 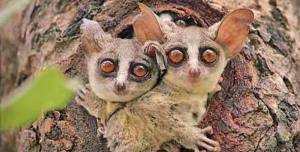 I’m thinking from the looks on these guys’ faces, they have just seen the male vervet monkey’s sapphire jewels for the first time!

The lesser galago, also called the lesser bush baby, is one of the smallest primates, about the size of a squirrel. Their plaintive cries and cute appearance may account for the name “bush baby.” They have night vision goggles for eyes and large, delicate ears that can track insect prey in the dark. Despite their small size, the bush baby produces loud, shrill cries surprisingly like those of a human baby.

Aside from these baby-like cries, they make croaking, chattering, and clucking sounds or shrill whistles in case of danger.  They are almost impossible to see except for possibly a glimpse of two red eyes peering down from a treetop at night, but we didn’t see them by day or night.