In a city of 1.3 million, Munich has over 40 museums. Their largest museum, the Deutsches, is supposed to be one of the largest and most important museums on technology and design in the world.

That wasn’t my area of interest, but I did visit an area of the City called the Kunstareal (art district) which has several large, impressive museums on a single square. The Alte Pinakothek (“old gallery”) is devoted to classical paintings and sculpture, the Neue Pinakothek holds the collection of 19th Century art, and the Pinakothek der Moderne holds modern and post-modern art. In addition, a private museum, the Museum Brandhorst, has a large collection of Andy Warhol paintings. There are also Egyptian and Greek museums of antiquities, and several others in the square. I focussed on the art.

The main reason I went to Munich was to see Reubens’ Great Last Judgement, painted in 1617. It was the largest canvas ever painted in its time, and the room within the Alte Pinakothek it is housed in was built for it. The museum was built in 1836 but this piece had been in the Wittlesbach dynasty’s collection since the late 1600’s or early 1700’s when it was ordered from Reubens.

This next painting is fun after you look at it for awhile – Just at the moment a tryst between Venus and Mars is being discovered – Mars is hiding under the bed hoping the dog won’t bark, but too late, and in case there is any doubt about the scene, look at Cupid, in the same pose as Venus, exhausted, spent, done.

The Brandhorst Museum, a playfully striped building, had several Andy Warhol paintings and a fascinating current exhibition of books Warhol designed or illustrated. Warhol’s art was so influenced by his work as a commercial artist. The next museum I visited, the Pinakothek der Moderne, had a display of Warhol graphic drawings which show his enormous talent. I am always amazed when someone simply picks up a pencil and puts it to paper, and magic happens. That’s talent.

The Pinakothek der Moderne had just re-opened after renovations, even though it was a relatively new building; this meant there were lots of locals out to see the new exhibits as well as tourists. The building is outstanding and in some ways reminded me of the Guggenheim in NYC but doesn’t have the same intimacy, It does have a much bigger collection and had a fabulous display of a Moroccan rugs. All the reds popped out against the white and concrete. The curator was trying to make a case for this being avante-garde work, which I thought was a bit of a stretch. They were beautiful rugs, and there has long been debate about what is art and what is craft which I think depends largely on the piece. The building was also large enough to accommodate large installation art which I always find fascinating, with a little guidance on its interpretation. There were also a few familiars – Matisse and Picasso. 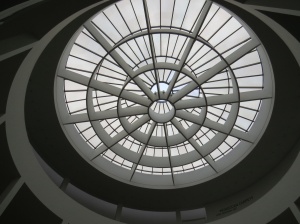 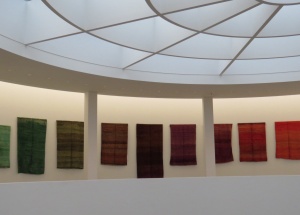 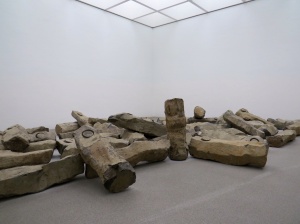 On Thursday, I had the option of seeing one more Baroque Palace, the Nymphenberg (which has an incredible gold carriage that was used by the Faerie Tale King), or heading to the Neue Pinakothek. Since it was teeming rain and I have seen so many palaces, I opted for the gallery. This also gave me the luxury of sleeping in and taking the morning off.

Among its collection of 19th Century art are many Impressionist paintings and paintings by Klimt and Schiele, two important Austrian painters. Klimt is recognized as the father of the Art Deco art movement. I was also impressed by the number of amazing portraits by German painters.

It was interesting to notice that although there were many, many portraits and busts of Ludwig I, I did not find a single painting of Ludwig II. I am not sure whether this was because he didn’t leave an impression on his country, or whether he simply didn’t wish to sit for a portrait and have his likeness on display. I have seen a couple of portraits online which I believe are held at his palaces.

For such a small city, these museums really put Canada to shame which, except for the National Gallery in Ottawa, isn’t hard to do. The Alte Pinakothek was the first built solely to function as a gallery and became an example throughout Europe. This may be a fact of history, but European countries were as busy with wars and revolution as we were with founding a nation. And I think they are leaving us behind in this era as well. Everywhere I went, and it was the same in Italy and Paris as well, there was scaffolding and sheeting up, which appear in some of my photographs. Even the Trivoli fountain was half enshrouded when I was in Rome. I see this as a different kind of beauty. Restoration and preservation of the priceless art in the architecture, churches, palaces, museums and statuary shows a love of history, culture and art. It is being funded by taxpayers who take pride and interest in their own unique culture and history. Yes, populations are increasing and gaps are being filled with modern buildings, but the antiquities are not being ploughed down to make way for more condos. Perhaps Canada and the US haven’t been countries long enough to value our history and preserve it for future generations.

It was pouring even harder by the time I had seen every painting in the museum. I waited around awhile, but eventually decided to head downtown for dinner before my 7pm final concert on my last night. I found a cozy little Italian place for dinner and watched the rain turned to snow!! I was soaked through and it was windy, cold and wet. I have had such fabulous weather overall, it was kind of a fitting way to be sent home from Central Europe and Russia, with snow nipping at my heels!

The concert was in a beautiful Baroque chapel in the palace, the Residenz, in downtown Munich, and was magical, two violinists and a cellist playing mainly Vivaldi music. The acoustics were incredible and the setting so fitting for the music. This was a lovely way to wind down what has been an amazing five weeks full of art, music and history. 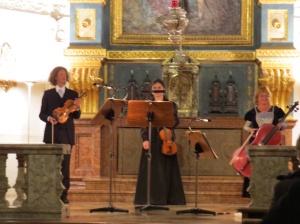