Before planning this trip, what I knew of Vienna was pretty much limited to the Waltz, the Danube, Mozart and Sacher Cake.  However,  it was the fact that Vienna was the cradle of a major European superpower that was to frame most of my visit.

The House of Habsburg began at least by 1020, but on March 19, 1492, it suited the political purpose of Pope Nicolas V to declare, in grand ceremony in Rome, Frederick III of Habsburg as Holy Roman Emperor. The House of Habsburg was Catholic and through the turbulent 17th and 18th centuries its allies were Catholic (with the exception of France, itself with so much power that the two were natural enemies).

Historically, the Habsburgs consolidated power through strategic marriages rather than war (although it was attacked often and forced into many wars). At various times through the dynasty’s history from 1438 to 1780, the family produced Kings of Bohemia, England, Germany, Hungary, Croatia, Ireland, Portugal, Spain and several Dutch and Italian countries.  Most of these countries and others were under the rule of the Holy Roman Empire at one time or another.

No-one was better at gaining power through marriage than “Empress” Maria-Theresia. This woman was a powerhouse and ruled Austria for 40 years, from 1740 to 1780. Though she was heir to the throne, the Holy Roman Empire was acceded by primogeniture, but she didn’t let a little thing like that stop her. Through sheer force of her will, she made her husband co-ruler of Austria and Bohemia and through the Treaty of Fussen, ensured her husband’s inheritance of the Holy Roman Empire, to which Francis I acceded in 1745. Her husband was not ruler material and therefore suited her ambitions perfectly (although his continual extra-marital activity was a problem between them throughout their marriage). Maria Theresia ruled the empire, making all political and war decisions, often turfing her husband out of the room when he disagreed with her. This painting, for which the family sat, says it all, her husband pointing to her, she pointing to herself, her eldest son (future Emperor Joseph II) at her side standing atop a star.

Over the course of 20 years, Maria Theresia delivered 16 children through several wars and troubling times.  She said but for her pregnancies, she would have fought battles herself.  Thirteen of the children survived, and all of the girls were named “Maria.”  Several were married to foreign kings and emperors,  including her youngest, Maria Antonia, whose marriage to the Dauphin of France was arranged as part of the resolution with France of the Seven Years War.  Maria Theresia wrote often to Marie Antoinette scolding her for being lazy, frivilous and for failing to conceive a child. Perhaps if Marie Antoinette had listened to her mother’s advice….   Maria Theresia controlled all of her adult children just as she had when they were young, and chided them for not producing more children.  She had “only” 24 grandchildren, whereas she would have liked 100.

Illustrative of the size of Maria Theresia’s ego and ambition are the tombs at the Imperial Crypt.  Her predecessors Joseph I’s and Karl VI’s tombs are the size of most people’s tombs – human-sized. The double tomb of Maria Theresia and her husband (he is listed there as her “consort”), which she herself had constructed, takes up an entire room; for context, when taking the photo below, I was standing in front of the tomb and my skull was below the height of the bronze skull at the bottom centre of the photo.

In addition to expanding and protecting the Empire, she buttressed the military, doubled state revenues, reformed medicine and started innoculation, introduced civil rights, increased some of the power of the state over the Church and improved public education.  Hers was the Golden Age of the Empire.

So with that background, back to Vienna.

After arriving by train from Prague but before even checking into my hotel, I dropped off my bags and was met by a driver to take a bus tour of Vienna and a trip to Schonnbrunn Palace, Maria Theresia’s magnificent summer palace, whose only rival is said to be Versailles (although Peterhof and Catherine’s Palace need to be added to this mix).  The palace is massive, with 1,441 rooms, only a few of which are open to the public.  Once again, I was struck by the originality of the rooms – they were equally opulent to previous palaces I’ve seen, but each room had a distinctive beauty.  One of the more priceless rooms was the exquisite Walnut Room which Maria Theresia called her “millions room” due to the expense of the wood.    The Great Room which MT installed was almost identical, complete with mirrors, to the Hall of Mirrors at Versailles.  Two round anterooms had stunning inlaid wood floors and gold embellishments.  The “Ceremonial Hall” had five magnificent paintings, one depicting the wedding of MT’s oldest son Joseph II.  It shows Mozart entertaining the guests, even though Mozart did not visit Schonnbrunn until two years after the marriage.  Much of the original furniture is intact, and many emperors used the palace after MT.  In fact, John F. Kennedy met with Khrushchev here in 1961.  (All the rooms can be toured at http://www.schonbrunn.at.)

The grounds are equally spectacular, complete with a carriage museum, zoo, palm house, maze and many outbuildings. 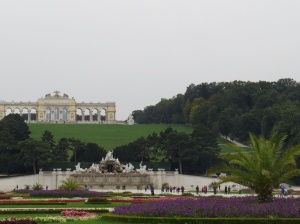 After this tour I checked into what was to be my favourite hotel, one I highly recommend.  Das Tyrol is a boutique hotel located a 5-minute walk from all the sites on one of the longest shopping streets in the world. It was such a treat to stay somewhere so comfortable on the fourth week of my trip. The sauna/steam room was wonderful as were the included breakfasts.

After checking into my hotel I was scheduled to attend an opera tonight. Attend I did, as I had been looking forward to seeing Strauss’s Salome, based on the Oscar Wilde play about the biblical story of Herod’s daughter and the beheading of St. John the Baptist. Perhaps it was because I was tired and had packed a little too much into my day, but I did not enjoy the opera at all. Much of the singing was swallowed up deep in the stage, the orchestra drowned out the singers, the lead soprano, while she had range, didn’t have the power needed and couldn’t dance (the story turns on the Dance of the Seven Veils) and the set and costumes didn’t work for me. The audience went wild for it though so it may have just been me. But here’s a production where it works better by surrounding the diva with professional dancers:  http://youtu.be/l98bRaUOMHw

So after a late bite and a glass of wine in the perfect little Italian restaurant around the corner from the hotel, I called it a day!

1 thought on “House of Habsburg”