Itinerary:
– walking tour of Pamplona, home of the annual Running of the Bulls
– Lunch: Restaurante Irunazarra
– Arrive at San Sebastian on the Atlantic coast, summer playground of the rich and royal

Our first stop today was at Pamplona, the city famed for the Running of the Bulls and Ernest Hemingway’s haunt and inspiration for The Sun Also Rises. Pamplona is also the capital of Navarra and a key stop along the Camino pilgrimage.

Festival dress at the doors to the bullring

Saint Fermin is the patron saint of Navarra, a Roman converted to Christianity who was beheaded in France for attempting to convert the French to Christianity. As the runners await the release of the penned bulls, the crowds chant San Fermin’s name, and the volunteers run for their lives at the release of the bulls. (Only 15 people have been killed in the race since record-keeping began in 1910.) The entire race to the bullring each day of the festival lasts about two minutes. The rest of the nearly 24-hour celebration takes place at the bullring, with thousands dressed in white with red bandannas in the seats, bringing picnics, music and joy to the stadium. The Running of the Bulls actually takes place in all regions of Spain and its purpose is twofold: a means to transfer the bulls from the farm to the bullring, and a celebration of the bull before it is slaughtered for its meat. 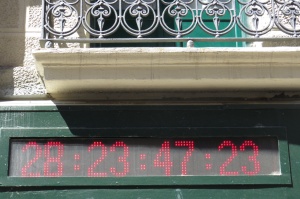 The countdown clock may be ticking for the Running of the Bulls, an annual festival running from July 6 to 14, but today Pamplona was full of festivities as it celebrated Corpus Christi with children from all the area parishes taking their first communion. 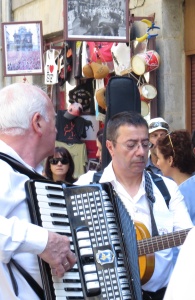 There was music and celebration everywhere.   Hundreds of children and their families walked in procession from the Catedral de Santa Maria to the Town Hall and back to the church again. Flower petals were strewn from above by guests who had booked hotel rooms along the procession’s route. 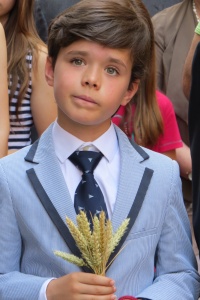 Of course, the day would not have been complete without lunch. Our guide, Mikel–

–took us to Iruna, the bar frequented by Ernest Hemingway, and above it, a beautiful private club where we dined on several courses including croquettes, roast suckling pig or Turbot, and copious amounts of wine. 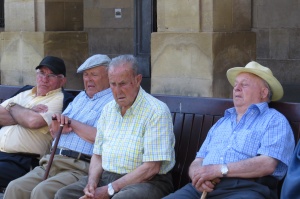 — were in order as we made our way from Pamplona to the glamourous and beautiful town of San Sebastian nestled in a bay on the Atlantic coast. We took a beautiful late afternoon stroll on the 7 km promenade, but we would learn much more about this Basque town on our walking tour scheduled for the following day.