Who knew the name of our first stop outside Barcelona, Zaragoza, was a construct of the name of Caesaraugusta? Not I, and I was equally surprised to discover Roman ruins here, including an amphitheatre that at one time held 6,000 seats.

Caesar Augusta, a gift to the city from Mussilini.

Zaragoza, along the Ebro River, is home to the Basilica de Nuestra Senora del Pilar with its colourful domes and many spires. Narrow cobblestone streets give way to gorgeous open squares. The broad main plaza houses the basilica, the city hall, at least two museums and several cafes. 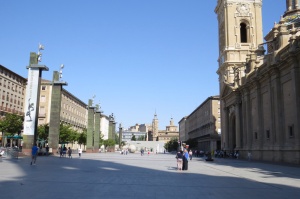 (BTW, we learned that a cathedral has a bishop, and a basilica has been blessed by a pope.)

We started our visit with a tour which began on foot. We visited the spectacular basilica (partially decorated by Goya) where, on a Saturday, at least five services were conducted. A group of local men were singing in sweet harmony as we watched the faithful praying and lining up to kiss the pillar on which a vision of the Madonna was seen several centuries ago leading to the construction of the basilica. We saw many weddings and a christening taking place and the beautifully dressed, coiffed and fascinatored guests. 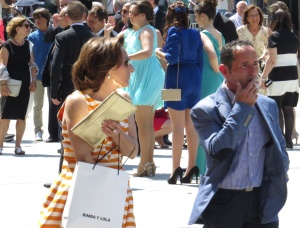 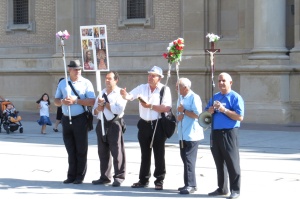 Next, we hopped on a waiting bus for a tour of the greater city which included the modern architecture on the site of Expo 2008. Zaragoza is the regional capital of Aragon, the same Aragon from which Catherine of Aragon was sent to England to marry King Henry VIII. To this day, the Moorish Aljaferia Palace built in 800 AD houses the regional parliament.  So, somewhat older than the BC Legislature. 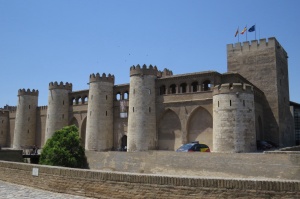 There is a sprawling indoor market with every conceivable cut of meat, slabs of fish, salted and fresh, cheeses and breads. On Saturdays, an outdoor market thrives just off the main plaza.

Speaking of food, at our scheduled group dinner, here is what I ate:
– Bread
– A salad of lettuces and large chunks of flaky tuna dressed with gorgeous Spanish olive oil
– A generous bowl of Chickpea and Lobster stew

– Buttery, melt in your mouth pork with patates and chiles
– Mojito sorbet, a profiterole and almond cake

– A shot of liqueur

A feast of Roman and Henrian proportion!

Zaragoza is filled with museums; we only had time for one. The Goya art museum was fascinating. In addition to seeing his paintings and portraits, we saw the work of his contemporaries and those who were later influenced by him. Born in 1746, he was influenced by the Renaissance and Baroque periods. Using the Gutenberg printing press, in the style of Charlie Hebdo, he satirized Spanish society in his published cartoons, skewering the nobility, the Church and the Inquisition, bullfighting, etc. Had he not already been a successful painter and Court portraitist, I imagine he would have been executed for his publication, too.

After Goya, Shirley and I sat sipping Sangria in the main plaza, people-watching and in particular watching the many stag and stagette parties go by in which the brides or grooms hire marching bands to promenade around the city competing for attention and popularity. 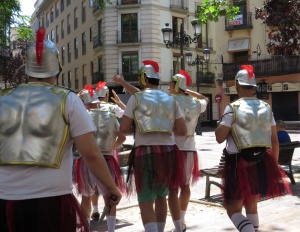 It was 36.5 degrees this afternoon, but not terribly humid so it was quite comfortable in the shade. However, I had no option but to buy a white linen suit to battle the warm temperatures. 😀

Other pretty sights on our walking tour today: 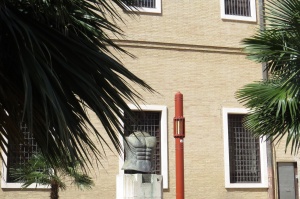 Rosa maintains this is not the most beautiful city on our tour. Huh.

Next, off to Pamplona and San Sebastian on the Atlantic coast!