Itinerary:
– Bilbao and the Guggenheim Museum designed by Canadian-American Frank Gehry
– travel to Santander
– Dinner at the Restaurant in Gran Hotel Sardinero

I woke before my alarm this morning, already buzzing with anticipation. This morning we were headed for the museum designed by Canadian Frank Gehry that I had for years longed to see.

The Town of Bilbao in the Basque region of Spain had at its heart a tired industrial centre. Badly in need of rejuvination, a number of ideas and plans were floated. The Guggenheim Foundation, an art collection of the wealthy New York Guggenheim family (housed mainly in the original Manhattan beehive-like structure designed by Frank Lloyd Wright), wanted another centre in Europe to showcase more of the collection. (There are Guggenheim museums in Berlin, Venice and Lithuania and planned museums in Helsinki and Abu Dhabi, in addition to other museums in North America: Guadelajara, Las Vegas and Soho.) Several European cities bid on it, but Bilbao won because it volunteered to pay the entire $133 million construction cost of the Frank Gehry design.

The Basque region is especially wealthy because of its industrial production. Within the first five years of the museum, the $133 million was earned back in entrance fees, but the building is extremely costly to maintain and a substantial amount of funding is carried by the Basque people.

The City of Bilbao was transformed by the Guggenheim museum. Straddling the Nervion River, the modern boat-like structure cloaked mostly in stainless steel is a shining, swirling, writhing building that seems to burst from the river like a salmon jumping upstream. Glass bathes the interior with light and the building is ideal for large, modern art installations. 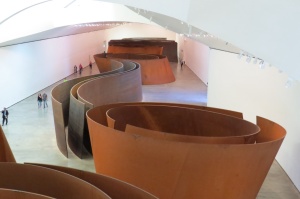 The permanent installations invite the viewer to explore, move through and touch the art. Walking through the exhibits allows you to receive the art more meaningfully; you are integral to the work and the work changes you. The exhibition of Jeff Koons’ work came with an insistence that his work be photographed. The “celebration” series is tinged with sadness – his beautiful, cartoon-like treatment of stainless steel was designed to ensure his young, estranged son knew his father loved him.

After a Basque lunch of pintxos (like tapas) and gazpacho, we left the Basque Region bound for Santander, in the Cantabria region.

We moved into hillier country and with that, the weather cooled somewhat and clouded over.

We arrived at the beachfront university and tourist town of Santander with time for a walk before dinner. The coastline is rugged here, the waves high, and in front of our hotel were schools of surfers taking first lessons on the beach. At one end were tiny islands causing currents and rough waters that looked just like the south end of Chesterman Beach at Tofino. A long promenade joined the city centre to the point. The Magdelena Peninsula has the Palacio de la Magdelena, a summer palace for the royal family built in 1908. It also has a public park and a small marine zoo that was home to seals, sea lions and penguins. I did not expect to see penguins in Spain! 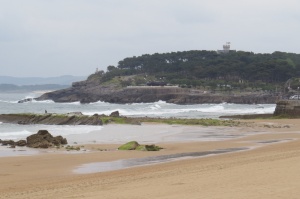 Another delicious meal completed our day: croquettes and delicious buttery pork tenderloin and vegetables. We have only a one-night stay in Santander in the lovely beachfront Gran Hotel Sardinero.

2 thoughts on “The Guggenheim at Bilbao, and Santander”