After the Friday evening service followed a delicious dinner at our stone hotel of croquettes, grilled prawns, grilled squid and pinwheel salmon with, appropriately, a scallop in its centre. (The primero of scrambled eggs filled with literally hundreds of baby eels, the equivalent to me of a plate of one million tiny snakes, was my worst nightmare, and I could not muster the bravado to even sample them.) 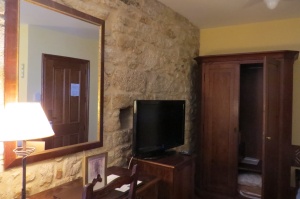 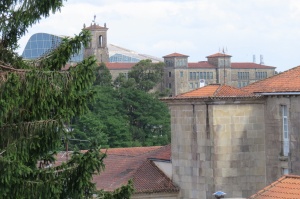 The next morning we had a walking tour of the old town, the market, the cathedral and the cathedral’s fascinating museum, cloisters and library. Manuel was one of our best guides and was recommended by Rick Steeves. 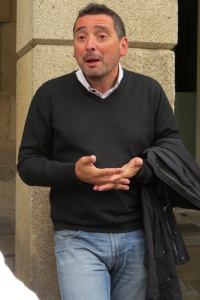 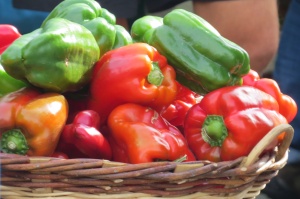 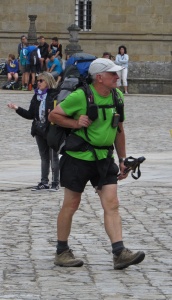 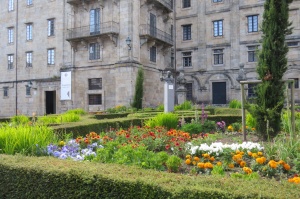 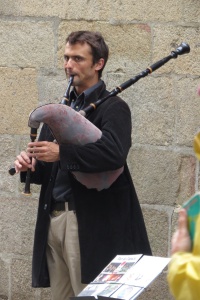 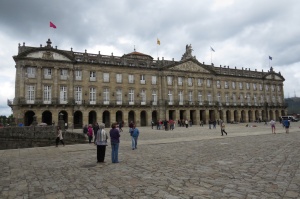 In the cathedral, we visited the reliquary where the bones of St. James are said to lie. 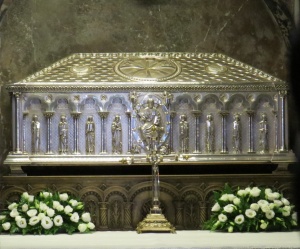 St. James, known in Spain as Santiago, was the fisherman disciple who died in Jerusalem in 44 AD. It was for centuries rumoured that his bones were carried to northern Spain and they were eventually discovered near this site in the 9th century. At that time, power in Spain was centralized in Toledo politicallty, religiously and militarily. In Toledo, Moors (muslims), Christians and Jews lived in a comfortable alliance. Alphonso II, using the example of Charlemagne’s rule in France, realized that if he was to seize power of this region, he would need the power of the Catholic church. He learned of the discovery of the bones of St. James and seized on this political opportunity to herald the discovery, move to militarily protect the pilgrims of the day on the Camino, and declare the Toledo Christians heretical.

Following the tour, we had lunch, shopped and wandered the pretty town, followed by the best hot chocolate I have ever tasted.. We left the old town – it has been fascinating to leave the touristic areas and wander the streets and grocery stores where ordinary Spaniards live. (The grocery stores have much the same junk food our grocery stores do – oreo cookies, spongebob squarepants crackers, etc.) 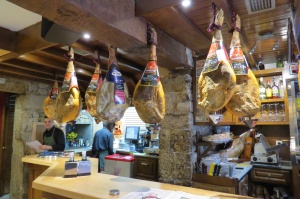 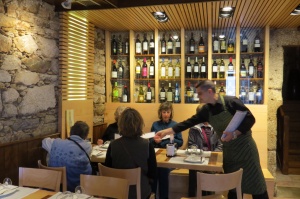 For a late dinner, we went to the Manuel-recommended No. 16 Restaurant, which did not disappoint. In an atmospheric stone-lined basement we started with a gorgeous walnut and goat cheese green salad with a cherry sauce, and I had my first entrecote, a perfectly medium-rare grilled steak the size of two New York strips. As usual, I managed my portions as best I could by eating only half of what was put before me. A delightful day shared with friends, old and new.