A UNESCO world heritage site with the Alcazar, former palace of Toledo, and the Cathedral, which have loomed over this city for centuries.  Built on jutting rocks, I expected to climb up to the city by ancient stairs or a funicular. 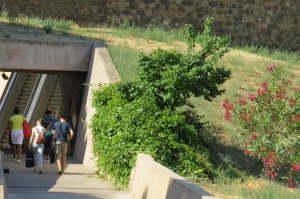 Located in the heart and geographical centre of Spain, Toledo developed into a strategically important city for the Romans (Toletum) and later, for the Visigoths (Catholic) who moved their capital from Seville to Toledo. Such was the Visigoths’ thirst for power that constant wars seeking to extend their reach left the city vulnerable, and Muslims were quick to conquer Toledo in 711. Under Muslim, and later Arab rule, this city of tolerance was a centre of learning and the arts in Spain.

The most beautiful aspect of Toledo’s history is that, at a time when the city was the centre of power in Spain, the trilogy of Catholics, Jews and Muslims cohabited in peace. All three cultures arrived in Toledo at around the same time, between the 4th and 6th centuries. This history is reflected in the city’s architecture, albeit construction of the surviving buildings didn’t start until long after the cultures established themselves in Toledo.

We didn’t have a chance to see the Mosque of Cristo de la Luz, built in 999, the only remaining mosque of ten built during the Moorish period. Then known as Mezquita Bab-al-Mardum, deriving its name from the city gate Bab al-Mardum, the mosque is located near the Puerta del Sol in an area of the city once called Medina where wealthy Muslims used to live. The atmospheric interior is graced by the trademark horseshoe-shaped arches introduced to Spain by the Moors. 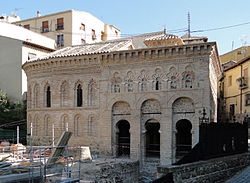 The Moors’ defeat of Spain is central to Toledo’s history. The stuff of legend, the last Visigoth King Rodrigo gazes out the window of his Toledo palace and sees the beautiful Florinda bathing in the river. Whether he rapes her or she tempts him (as she stated) remains as debatable as the story of Adam and Eve. Florinda’s father, Julian, is in Mauritania when he learns of the loss of his daughter’s purity at the hands of the King. Enraged, he gathers together an army of Moors and crosses into Spain at Gibralter. It is said that Julian paved the way for the Moors to conquer Spain at Toledo and go on to rule the Iberian peninsula for 700 years.

We visited the exquisitely decorated Sinagoga del Tránsito. Construction of the 14th century synagogue was financed by Samuel Ha-Levi, treasurer to the king, Pedro el Cruel (Peter the Cruel). Modest on the outside, the inside consists of a simple rectangular room, although beautifully decorated. The central panel around the three arches is surrounded by inscriptions in praise of God, the King, and Ha-Levi himself. The women’s balcony above may have the best view of the interior decoration of the synagogue. We only had time for a brief peek at the small Sephardic museum and library attached to the synagogue. 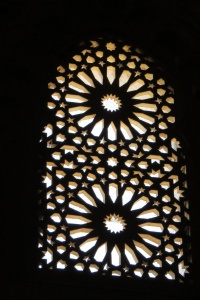 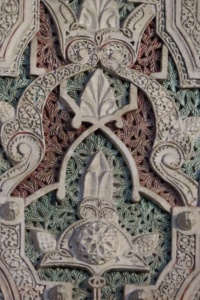 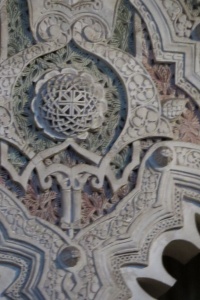 In 1085, as part of the Reconquista, Toledo was seized by Alfonso VI and the Vatican recognized the city as the seat of the Church in Spain. Construction of the magnificent Toledo Cathedral began in 1227 and was completed in 1493, just one year after Isabella and Ferdinand united Spain. By this time, the years of pride and tolerance were swept aside in Toledo and Muslims and Jews were forced to convert to Catholicism or be expelled. In 1561, Phillip V moved the Spanish capital to Madrid, but Toledo’s landscape would forever be dominated by the stunning Gothic cathedral. 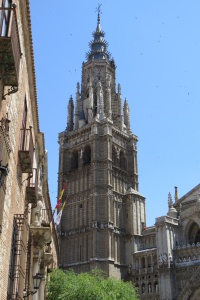 The building’s interior is equally impressive.

Behind the high altar is a smaller baroque alter of marble, bronze and alabaster. Because of the dim light in the area, an aperture, known as the Transparente, was carved out of the dome above to illuminate the altar. Sculpted figures, looking down, rim the edge of the dome, while painted biblical scenes cover the dome itself.

The choir stalls have wonderful, detailed carvings in walnut, the lower tier depicting the conquest of the kingdom of Granada, the upper tier celebrating Biblical figures. 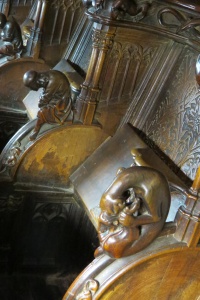 Graves of cardinals are marked by their galeros hanging above them.

Considered the richest cathedral in Spain, the Sacristy has paintings by El Greco, Caravaggio, Raphael, Titian, Reubens, Velázquez and Goya. The treasury boasts the great Monstrance of Arfe, also known as La Gran Ostensoria de Toledo. Made of the finest, laciest silver and gold and bejeweled with gems, it measures over ten feet tall. The monstrance graces the famous annual feast of Corpus Christi of Toledo.

World #19 tennis star Feliciano Lopez was married just days ago in his home town of Toledo, at the gorgeous Toledo Cathedral.

Toledo was the centre for art, philosophy, mathematics and economics. Its most famous representative is El Greco.

Italianate painters developed eclectic and mannerist styles in Spain. It was only toward the end of the 16th century that a genius appeared who truly incarnated the dark, mystical Spanish idiom [think St. John of the Cross] –   El Greco. With roots in Greece and Venice, and in his own version of mannerism, El Greco merged Italian Renaissance painting with his own incandescent vision. In 1577, he moved from Rome to Toledo, where he lived and worked until his death.

El Greco’s style may not have been fully appreciated until the 20th century. His work is now regarded as foundational to both the Expressionism and Cubism movements.  Clearly influenced by Botticelli and his elongated figures, he also borrowed the surreally rich colours of Byzantine. 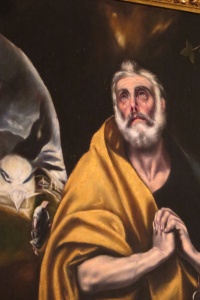 Naturally, we managed to fit in a little eating and shopping in Toledo. The world-famous marzipan lived up to its reputation – rich, buttery almond paste contrasted with apricot jam – the dragon makes a special treat and great souvenir for my family of marzipan devotees.

A marvellous, authentic fixed lunch was had at the aptly-named Restaurante Dragos.

We spent a wonderful day in Toledo, but there is much more to see next time. A few days could easily be passed here in this rich, timeless city.