I don’t quite know what to do with Madrid.

Virtually our whole trip involved regions whose people are proud, culturally unique and desperate to individuate themselves from Spain. Some fought civil war for independence and lost (Catalans). Some died and killed protesting for independence (Basques, from both sides of the French/Spanish border). Another was first an independent kingdom (Galicia) and since 1931, has autonomous status.

No wonder when we arrived in Madrid, it was like entering a foreign country.

Would a visit to Madrid make more sense after touring southern Spain?

Perhaps, but here we are: plunge in.

The third largest city in the EU after London and Berlin, Madrid has the third-largest GDP in the European Union and its influences in politics, education, entertainment, environment, media, fashion, science, culture, and the arts all contribute to its stature as one of the world’s major global cities. Due to its economic output, high standard of living, and market size, Madrid is considered the major financial centre of Southern Europe.

Downtown, such as in the Puerta del Sol (“Gate of the Sun”) Square, the shopping district in the heart of Madrid, teems with a casual, happy combination of tourists and a good portion of the city’s six million local residents. Air-conditioned stores are an oasis from searing temperatures, and the street cafes send a cooling mist over their patrons to beat the heat.

Across from our hotel, busloads of children from across Spain depart, first posing for a group photo and a school song, from a Broadway-style theatre showing The Lion King.

On our city tour, we saw the famous bullring, El Prado museum with its impressive statues of Velazquez and Goya outside, and some of the city’s most beautiful squares and parks. 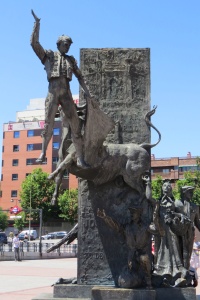 We didn’t really have time to explore the city’s cuisine, but we did have some wonderful meals, pans of seafood-laced paella so big an extra table had to be added to hold them, meals with endless courses from sampler-sized glasses of gazpacho through to liqueurs and chocolate, and dinner served al fresco at midnight. My very last meal – lunch – in Spain has to include gazpacho and buttery, melt-in-your-mouth fish.

I think what makes Madrid really stand out from other cities its size is the art. I had been to the two major public museums, El Prado and the Reina Sofia, and on my last day I visited a wonderful private collection at the Thyssen-Bornemisza Museum.

This museum, housing the private collection of the Thysson-Bornemisza family, includes classical masterpieces, such as the work of Michaelangelo’s master, Ghirlandaio, as well as an impressive array of art from genres not found in the public museums, such as Impressionism, 19th Century American art, Fauvism and even pop art.

Of course, no trip to Spain would be complete without an evening of Flamenco. Passionate, steamy Flamenco. So intense was one of the dancers that afterward we were searching under our table for her earring.  I came across an interpretation of the dance in the article on the page at the top, “Flamenco: Tempo de Amor.” 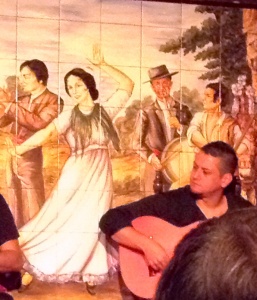 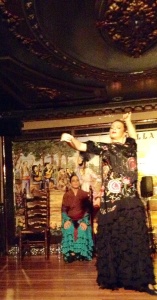 For me, Barcelona had an edgier appeal than Madrid, but there is much more to explore here, and much more to ponder.  Another trip to Spain is definitely in order, don’t you think?

1 thought on “The Capital City”