The Pyramids hang over Cairo and Cairo hangs over the Pyramids.  You turn a corner at these iconic, monumental images of the Pyramids and pause: these are the real thing.

As previously mentioned the Great Pyramid was thought to have been commissioned by Pharoah Khufu during his reign in the Old Kingdom era, 2,589-2,566 BCE.  This remained the largest building on the planet until the 20th Century, some 4,500 years.  It is not known how it was engineered, but modern conjecture is that it was constructed by workers, not slaves.

We first stopped to touch and climb to the entrance of the Great Pyramid. 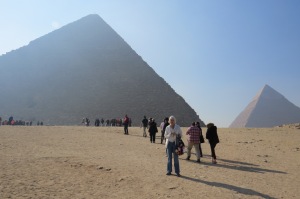 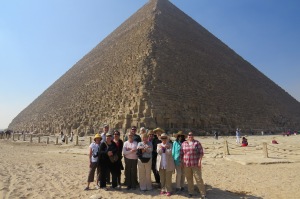 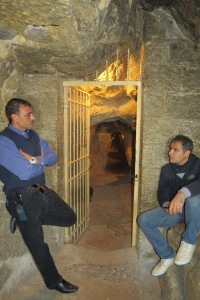 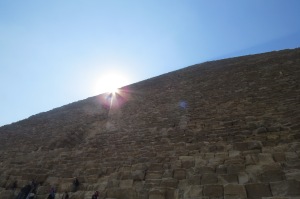 It was easy, with Agatha Christie and other pre-conceived notions from contemporary culture, to discern the non-Middle Eastern tourists from the locals: 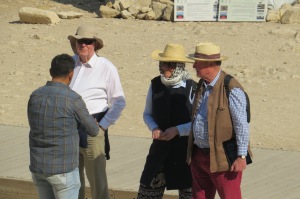 To really experience the Pyramids as they once were, unspoiled, you have to go around the back, and for breathtaking views, you really need to ride a camel for an hour and a half out into the desert.   No problem! – Waleed had a caravan assembled waiting for us. 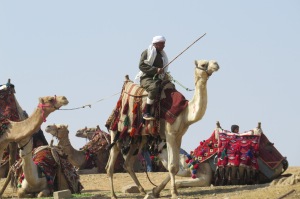 Johnny, my adorable camel, acknowledged me when I patted him through his blanket and spoke his name.  He was affectionate with, or indeed seeking out regurgitated food, from his fellow dromedaries.  I prefer the former.  My lead assured me that dromedaries don’t spit; of course I learned otherwise when I later googled it.   One of the camels gurgled so profoundly that a surprising pink bladder fell out of his mouth whose contents appeared imminently to be disgorged, but thankfully that was just a show of strength.  It was a delightful, gentle ride, and an unforgettable experience.  However, some camels are, apparently,  better than others, if you want a laugh, click on the link above, “How to Ride a Camel.”

Our experience was ethereal, calm, quiet and magical.  Even as I was riding I knew it was an experience of a lifetime. 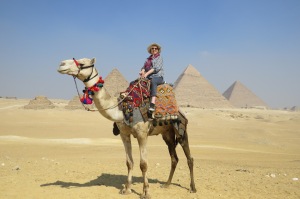 To round out a perfect day, we visited a perfumerie before heading back to our hotel.  Temple Flower Essence, a perfumerie who supplies Paris with many of its essential oils, its owner had been in the family business since he was 8 years old, and he knew every perfume on the market, right up to today’s most popular brands.  It was slightly unsettling to hear him listing “Passion,” “Obsession” and “Opium,” but he exuded warmth and knowledge and also provided a wonderful lunch of Falafel sandwiches and Karkady tea.  His lovely staff member on the right in the last image clapped her hands and cheered after I took her picture; it was the first time a customer had asked to take her photo. 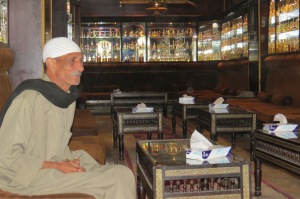 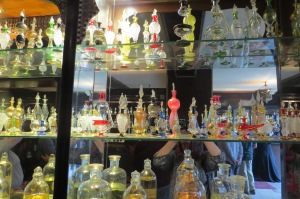