This afternoon we drove north to Alexandria. Along the excellent highway connecting Cairo to Alexandria, we passed many examples of pigeon coops which are seen all over the country. Pigeon is commonly eaten in Egypt (like chicken or Cornish game hen, reportedly delicious), and people keep their own pigeons as a food supply. 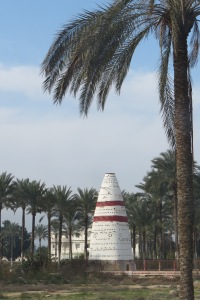 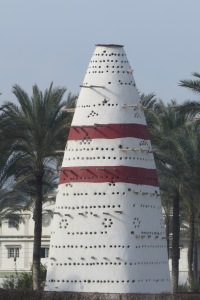 Arriving in Alexandria felt like coming home – sea air, fresh breezes and foam-crested waves. Alexandria is the northernmost city in Egypt on the Mediterranean and has a much more European (and west coast) feel than Cairo. It is much cleaner and “Le Corniche” (“the Crescent”) is a several-kilometres-long promenade along the beach. 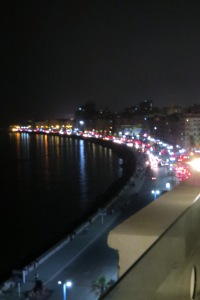 We also quantum lept ahead to 356 BC (so young!). The city was founded by Alexander the Great (from Macedonia) and it was the greatest city in the world in its day. Like Mohammed Ali, and the Moors who ruled Spain for hundreds of years, Alexander devoured country after country but his success in maintaining power despite long absences was thru tolerance. He died at a very young age and It is unknown today whether he was buried at Alexandria or in Macedonia.

Cleopatra, Alexandria’s second-most famous citizen, also ruled from Alexandria but because the Greco-Roman Museum was closed for renovations, we didn’t learn too much about her.  Cleopatra’s palace is buried at the bottom of the sea (there are points in Alexandria where you can actually see some of the ruins beneath the sea, but we didn’t make it there) and will probably one day be turned into an underwater museum.  I did picture her sweeping along Le Corniche in all her majesty, black hair swept back in the breeze and lilac black-lined eyes gleaming. 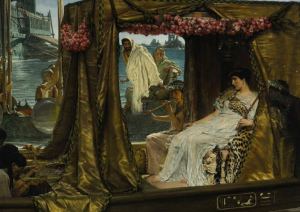 We visited several sites from the Greco-Roman period, and all were enhanced with Egyptian artifacts.  Pompey’s Pillar is the largest triumphal column outside of Rome and Constantinople and was carved from a single piece of stone.  The pillar was surrounded by Egyptian relics including a symbol of eternity which looked like a rose of stone.  We visited an ossuary and a life-sized image of the Apis Bull. 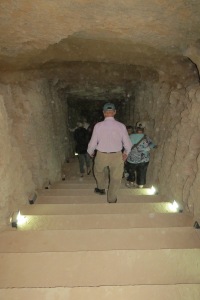 Our most important visit today was to the Alexandria Library.  I was excited to see it, it was one of the attractions of Egypt for me.  In its ancient day, the Alexandria library was famous; it was the most important collection in the world, with over 400,000 scrolls amassed of the most influential literature of history at that time. Sadly, that library burned down. It isn’t clear whether it was Julius Caesar, the Coptic Christians or the invading Muslims who are responsible for the destruction of the library and its contents. To me, it is fantastic that Egypt has honoured this important history with a modern library on its former site. When we visited, a large group of women who are educators was holding a conference. Imagine how significant that is in Egypt and how honoured I was when two of them wanted a photograph with me. 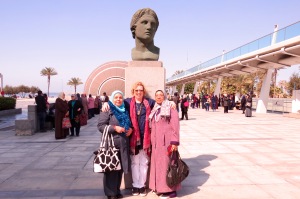 The stunning library, 80,000 square metres in size, was commissioned by the Ministry of Education during Mobarek’s leadership.  Egyptian architectural firm Hamza Associates built it – it was designed to mirror the rising sun. 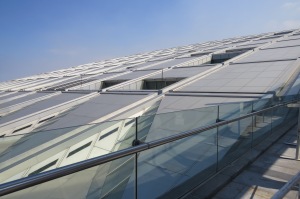 The interior of the library made me think maybe I should come here and study Egyptology, I wouldn’t be the first. 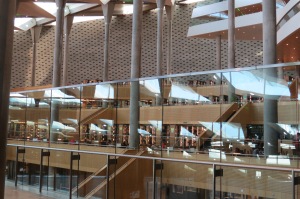 The museum has a sophisticated website.  The link is:

There are several museums in the interior of the library, and Chris Mundigler recommended I visit the Museum of Manuscripts, which naturally didn’t disappoint.  There was a reproduction of the Rosetta Stone, the key to unlocking the language of the hieroglyphs, the original of which is currently trapped in the British Museum (it’s my blog). 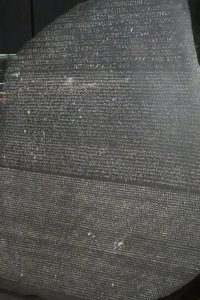 There were many beautiful manuscripts and papyri here: 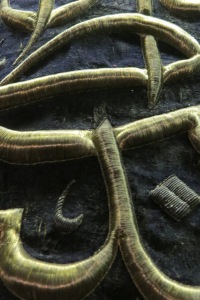 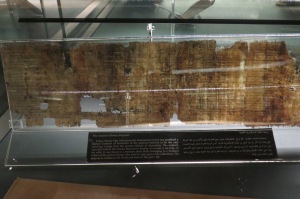 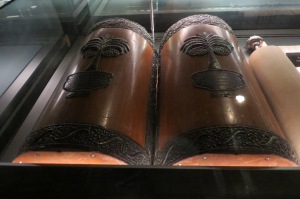 We finished the day with a fresh seafood dinner overlooking Le Corniche, but I was so hungry I devoured dinner before I thought to photograph it.  We returned to our elegant, older hotel where I kept expecting Agatha Christie to pop out.  The cacophony of honking horns followed us to Alexxandria.  I saw several funny signs in Egypt, but this one was the best, just outside our hotel.  I should have taken video so the horns could be heard: