Whether the modern name Buenos Aires still reflects the reality of this city of nearly 3 million and 40% of the total Argentine population, is debatable, but certainly the air in Bs. As. is clearer here than the pinkish smog that hung over Santiago.  Founded by a Spanish expedition in 1536, the city is one of the world’s great ports – facing the Rio de la Plata (“river of silver”) looking far across its 220 km width to Montevideo, Uruguay. 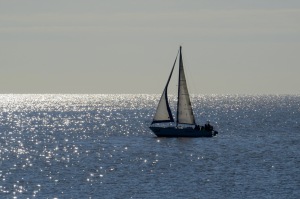 Known as the Paris of the South, Buenos Aires is the most European city in Latin America.  In its own Belle Epoch (golden age) at the beginning of the 20th century, French planners and architects were brought in to fashion a beautiful city.   9 to Julio Avenue (July 9th Avenue referencing Argentina’s Independence Day when in 1816 Argentina gained independence from Spain) claims to be the widest street in the world and rival to the Champs-Elysees.  White palaces line the street (many of them now used as embassies), buildings were constructed like the architectural marvel and one of the top opera houses in the world, the Teatro Colon.  A white obelisk presides over one end of the avenue while a high tower has been inscribed with a cameo of Buenos Aires’ favourite (or at least most contraversial) citizen, Evita Peron. 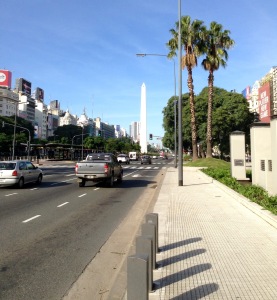 The city has an incredible network of beautiful green parks with triumphant trees, rose gardens, lakes, marble statuary, song birds and flocks of wild, bright green, noisy parakeets too busy to pose for photographs.  Like Parisiennes, Argentines are mad for dogs and the city’s dog walkers can be seen in the parks with a hundred dogs at any given time. 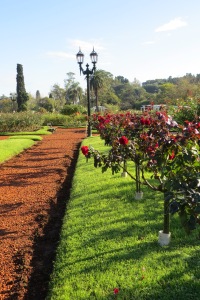 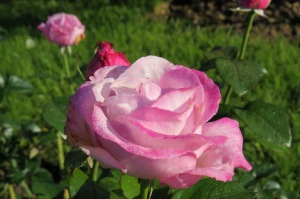 Side streets are leafy, shady avenues lined with cafes and bars whose outdoor tables overtake the sidewalks, which open onto squares.  It is autumn here on the Southern Cone, summer vacation ended in March, stores are packed with alpaca sweaters and shoppers are bundled in puffy coats and scarves, even though the daily high temp can reach 21.

Buenos Aires is known for its diverse neighbourhoods, each with its own character.  Our hotel is in Palermo “Hollywood” and we really did see film shoots and movie people.  Next door is Palermo “Soho” which I’d been told is shopping heaven.

Exhuberant young women and elegant older ladies wear sparkle, glitter, and 8-inch platform heels and totter along cobbled streets.  This must be one of the best shopping areas in the world, more like Milan than Paris, with customers from all over the world.  There are blocks and blocks of stores with antique wrought-iron and polished wooden doors that open by buzzer.  Inside, eclectic collections of bags, shoes, jewelry, clothes, jeans and home dec in gorgeous, creative displays. Outside the doors, lively markets with simpler handicrafts. There were all kinds of specialty stores, such as one with woven ponchos, handmade by one family for 150 years.

I did my best to contribute to the economy.

Another elegant BA neighbourhood is Recoleta, an upscale neighbourhood where even the deceased reside in glamour.   Some of the most renowned Argentines are buried in Recoleta cemetery.  I’ve always found cemeteries fascinating for the stories they tell, and I’ve never seen a cemetery like this – a small city unto itself.  Each building will hold several generations of a family deep into the ground, and some even have elevators. 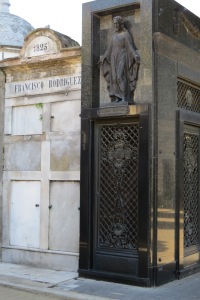 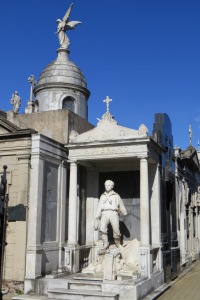 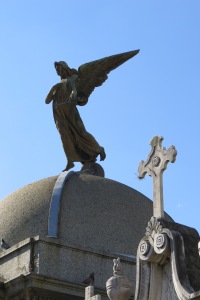 Probably its most famous inhabitant is Eva Peron (nee Duarte) whose enduring impact is evident by the fresh flowers placed here to this day. 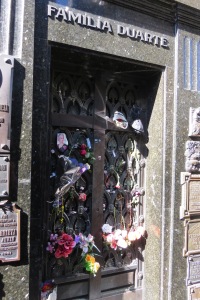 Evita is the Argentine equivalent to Diana, the “People’s Princess.” Although she had the most expensive jewelry and Chanel gowns, she had been born into a poor family.  She eventually made her way to BA as a soap actress. There, she met Juan Peron when he was verging on becoming President of Argentina in 1946. They fell passionately in love and eventually married. Naturally, the aristocracy disliked and felt threatened by her.

When Juan ran for President, Evita’s political skills emerged and she brought trade unions and the poor to support Peron. Once Peron was in power, she literally became the country’s Ministry of Social Services, and built hospitals and schools. There was always a lineup outside her door and she gave homes, clothes, food and anything else needed to the poor, always giving them more than was requested.  She raised money herself, got large donations from trade unions and eventually the government had to create a budget and grant funding for the progressive work she was doing.  Juan Peron was hoping to make her Vice-President when she got the devastating diagnosis of terminal cancer. She died, the country wept, and Evita became a martyr and remains a powerful political figure today.

We came upon a student demonstration in support of “Peronism” – invoking the name and work of Evita Peron. 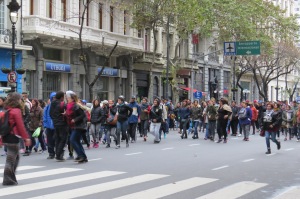 Of course this city has a dark side.  On every building, every home, there are bars on windows and metal shutters, usually down.  There is an incredible police presence.    And we drive past shantytowns, vast neighbourhoods where there are few windows in buildings that surely should be condemned, sometimes butting up against million-dollar condos.  We were told that most of these inhabitants are recent immigrants who have no access to social programs, but this seems unlikely.  The bright side is that there is a growing middle class and we did visit neighbourhoods that were comfortable so I hope the social programs will continue to expand and living standards will demarginalize.

Like Santiago, and indeed Berlin, Buenos Aires is finally, in recent years, making its dark history of the “disappeared” an open topic.   A beautiful memorial was built along the Rio de la Plata where so many citizens
disappeared.  Its location between the river and a municipal airport with planes zooming overhead (many of the disappeared were dropped in the river from “death flights”) is a poignant reminder of the dark past and again we saw several school tours and children looking for their family names on the memorial.  There are 9,000 names along the wall, some as young as 13 and most under the age of 25, those who could be identified among the 30,000 who disappeared.  Several artists were commissioned to make powerful works of art. 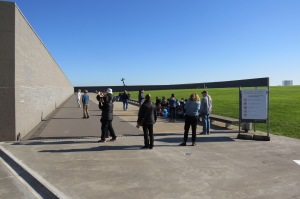 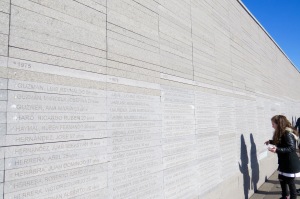 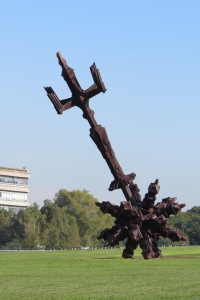 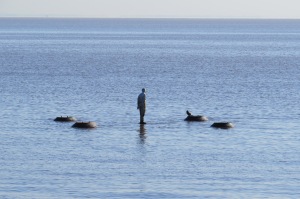 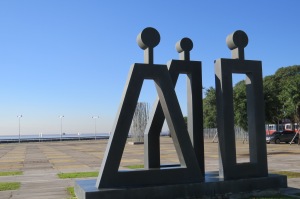 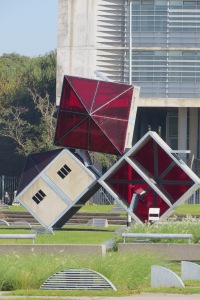 All in all, on first impression, this city has room to breathe, is expanding its lungs, and deep gulps of its air make me want to explore more.