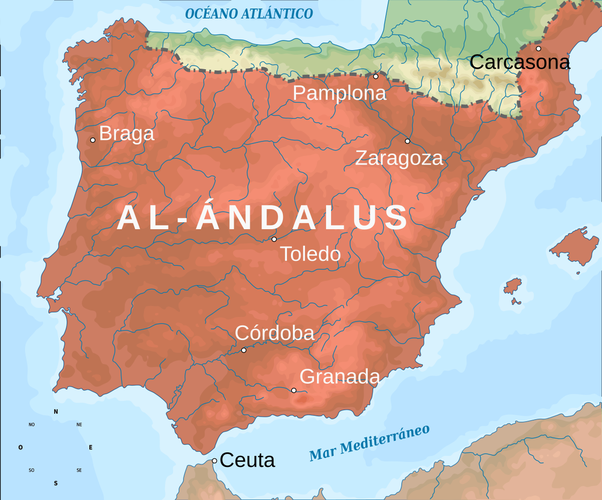 It was a dark day in 750 A.D. in the Muslim city Damascus, Syria, for the once-ruling Umayyad dynasty and their young heir-apparent prince Abd al-Rahman.  The family’s arch rivals, the Abbasids, seized power from the Umayyads and, to eliminate any threat to their rule, massacred the entire Umayyad family save Abd al-Rahman who fled Syria for Egypt.

The Abbasids moved the Muslim Caliphate to Baghdad and ultimately, the rich tapestry of the Arabian nights was woven and a Golden Age of Islam followed there.

Abd al-Rahman continued fleeing westward until he managed to cross the North African desert to his mother’s birthplace in northwestern Africa.   He became aware of the land to the north where he saw competing Muslims, the Berbers, make incursions.  He and his devoted military soon took Gibralter and within only eight years, had conquered most of Spain, naming his territory al-Andalus (“Land of the Vandals”).

(Music in transition from Damascus, Syria to Cordoba, Spain)

A western rival Golden Age of Islam was about to unfold in al-Andulus, described by a visiting Arab as  “the highest of the high, the farthest of the far.”

From the 8th century came a period of extraordinary cross-cultural creativity known as La Convivencia (the, Coexistence).  Christians, Jews and Romans were free to practice their own religion.  As long as taxes were paid, everyone was able to carry on with their lives, and prosper.

My heart can take on any form:
A meadow for gazelles, a cloister for monks,
Sacred ground for idols, kaa’ba for the circling pilgrim,
The tables of the Torah, the scrolls of the Koran,
My creed is Love; wherever its caravans turn along the way,
That is my belief, my faith.

The Muslims from the south introduced irrigation which revolutionized Spanish farming and with that came new foods, spices and textiles, just the first of many wonders of the Moorish world.

Córdoba was the first magnificant Moorish capital of al-Andalus.  It was one of the most advanced cities in the world, and a great cultural, political, financial and economic centre.  Homes had running water and streets were lit at night.  A great period of scientific and mathematical advancement ensued (bringing with it Arabic numerals and terms like “algebra” and “algorithm”) while the rest of Europe was in the Dark Ages.  Paper was introduced and there were some 80 libraries in the city including the largest library in the world with over 400,000 texts and 500 employees.  There were medical centres and an educational system.  Philosophy was studied and Arab translations of long-neglected Greek works of philosophy helped lay the foundations of the Renaissance.

We crossed a Roman bridge:

And had a quick lunch in a pretty courtyard.

Over one hundred mosques were built including the massive Great Mosque of Córdoba built by Abd al-Rahman to rival in magnificence those of Baghdad, Jerusalem, and Damascus.  He took inspiration from his beloved mosque back in Damascus, the Amayyas Mosque pictured above.  A famous Syrian architect made the plans for the Mosque. Leaving his own house on the edge of Córdoba, the Emir came to reside in the city, so that he might personally superintend the operations and offer proposals for the improvement of the designs. Abd al-Rahman moved about among the workers, directing them for several hours of every day.  There are 856 columns of jasper, onyx, marble, granite and porphyry.

The Moors went on to rule most of Spain for over 700 years.  Centuries later, after the Reconquista, the centre of the mosque was gutted and a cathedral was inserted.

Two of the domes: 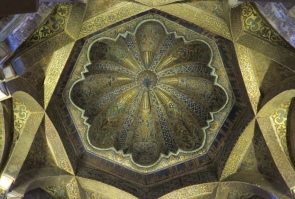 And some security personnel were installed:

The exterior of the massive complex looks like this from the air:

After our tour, we drove on to Seville, and dined in a fitting ambience. 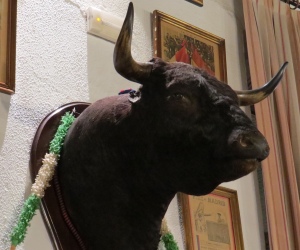