Just a few highlights of Barcelona where my sister, Bonnie, joined me for a fabulous week.   There are further posts below made 4 years ago during a previous trip to Spain, but Barcelona is one of my favourite cities in the world and I couldn’t stop myself from taking more photos.

One observation:  four years ago, Catalan independence flags hung from almost every balcony.  Since then there was a failed attempt to separate by referendum in which the supporters of an independent Catalonia believed police brutality intimidated voters leading to the failed result.  Most of the party leadership were jailed for treason and Carles Puigdemont, the leader, is in exile in Belgium.  Recently, there were failed talks to resolve the issue of Catalan autonomy which in part led to a new election.  The result of that election was a minority re-election of the governing party (and a rise of the new populist party, Vox).  We saw far fewer Catalan flags this trip, suggesting either that Catalonians have given up hope for independence or that they are intimidated.  We did see many yellow ribbons which symbolize support for the jailed leadership, in the hope the charges against them will be dropped.

Joan Miro is one of Barcelona’s most beloved artists and a man who led the way for a modern expression through art.  We visited the Miro Foundation on Mt. Monjuic.

Since the “martyrdom” (torture and killing) of 13-year-old St. Eulalia for her refusal to denounce Jesus, the nuns in the cloister have kept 13 geese.

At the end of the day in the narrow streets of the El Born district, we managed to find a little pizza place with NO fish (so Bonnie could eat there).  However, try as we did, we never found it again.

On a gorgeous day, we headed to Barceloneta, Barcelona’s beautiful beach and neighbourhood.  On the beach we saw Frank Gehry’s fish sculpture created for the 1992 Barcelona Olympic Games.  We took a cable car up Montjuic where we had a glass of cava and enjoyed the views. 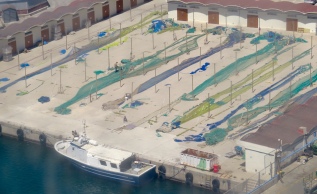 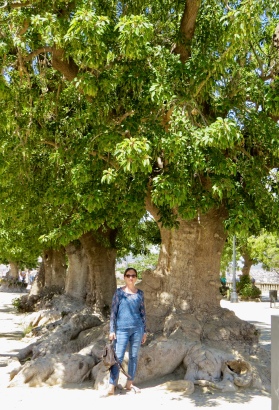 We visited the Museo Picasso and saw “Science and Charity”, the original painting that was in an earlier post – the painting that launched Picasso’s art career at age 16 and caused his father to abandon his paints.   There were early portraits of Picasso and his father.  Another painting made at age 20, “The Prisoner,” is powerful.   We also saw his renditions of the city’s Columbus statue and Velazquez’s Las Meninas. 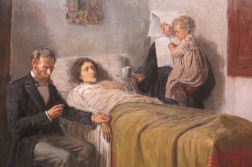 This was one of two highlights of the week.  We had watched the show “Somebody Feed Phil” (Barcelona episode – linked below).  Phil was the writer and inspiration for the tv show “Everybody Loves Raymond” and he is now doing a foodie show.  He mentioned the restaurant “Tickets” and the bar across the street, “Bodega 1900.”  The two are owned by the former chef/owner of El Bulli, the restaurant voted best in the world for 10 years straight.

We headed for Bogeda 1900 knowing there would be too much seafood on the menu at Tickets for Bonnie’s allergy.   On arrival at Bodega 1900 we learned reservations are booked 2 months in advance.  I asked if we could just have a drink and the delightful waiter (who did a little Charlie Chaplin jump of delight every time he went in the restaurant door) said “Outside?”  Okay!  Once we were ensconced in our little outdoor table, the food started to arrive (“yes, Madam, we know all about food alergia and cross-contamination”).

The olives weren’t really olives, but some sort of shell with a burst of intense olive flavour inside.   We ordered roasted white asparagus with lemon mayo and it was one of the most delicious things I have ever tasted.  We immediately ordered more.  Then came artichokes with Iberian jamon (like prosciutto), which arrived looking like roses.  We finished with perfectly caramelized Creme Caramel.  Spectacular!  The whole evening was made more fun by the camaraderie with fellow diners from Chicago and L.A who had also come here after watching SFP.  The power of the media!

The other highlight of the week was going to the opera, Verdi’s Il Traviata, at the spectacular Palau de la Musica de Catalonia, with Yasuko and Bonnie.  The singers were superb and the orchestra was very good.  The setting was incredible (more to come) and it was a delightful way to spend our last evening in Barcelona.

Since this was Bonnie’s first visit to Barcelona, we covered as many Gaudi constructions as we could.    I enjoyed seeing some of them again, and it was fabulous to see the progress on the Sagrada Familia.  The goal is to complete the cathedral, with 8 spires, by 2026, the 100th anniversary of Gaudi’s death.

Casa Batlio is a Passeig de Garcia mansion Gaudi built that is available to tour.  The stunning blue tiles lining the central courtyard and the visit to the roof were highlights. 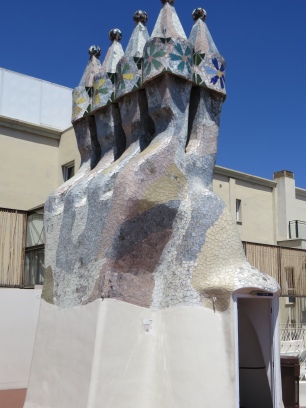 La Pedrera is much more accessible to the public than it had been.  We were able to walk in the door and do our own tour of this condo building during the day when the light was best.  The chimney pots and vents on the roof inspired George Lucas’s stormtroopers in the Star Wars series.  Lunch in the Cafe de la Pedrera, whose interior was also designed by Gaudi, was a must.

We taxied to Park Guell as it was quite far from our hotel and an uphill climb.  The magnificent park was conceived by Gaudi as an upscale neighbourhood, and there are several occupied large homes on the vast property.  There are two small Gaudi buildings open to the public but the most impressive sight is the “serpent bench” which winds around a square;  it makes a poignant setting for the many Catalan protests and demonstrations which occur here.  Afterward, we wandered down through some little streets and white Sangria to be served on a downward slope awaited us. 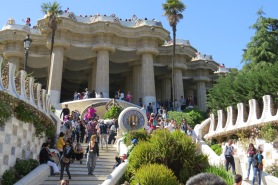 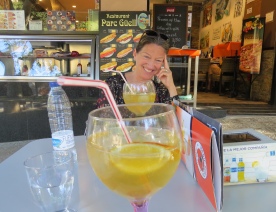 The Sagrada Familia  is the most beautiful building I have ever seen, so breathtaking that it almost makes me feel religious.  The light inside glows from the sunlight pouring in the stained-glass windows.  They are hard at work on the exterior, especially on the remaining 4 spires to be completed.    Every attempt is being made to adhere to Gaudi’s vision for the cathedral. 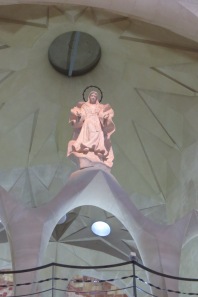 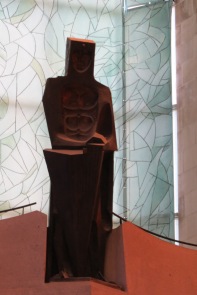 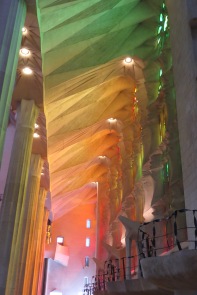 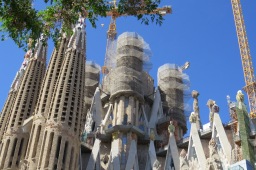 We took a side trip to the charming town of Girona, where an annual flower festival was in full swing.  Set along the river, it  evokes an image of the city of Florence, Italy, along the Arno.  The narrow streets and squares are delightful, the shopping looks fabulous, and this would be a fantastic place to return to for a few days. 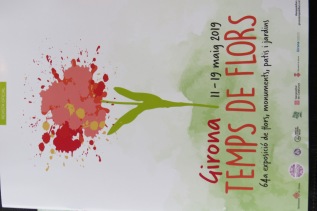 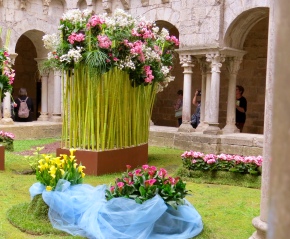 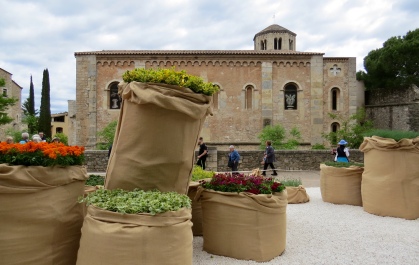 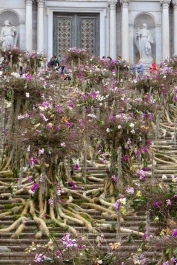 The possibilities in Barcelona are endless, and what a variety of experiences we had this week – great food, important art, poking through the narrow streets of El Born and the gothic quarter, the beach, the architecture, the music – there is every reason to return and return and return to Barcelona.