I needn’t have worried, everything Murat and Norman had done in planning this trip should have led me to the fact that they planned our last day perfectly, and ensured we had enough time to fall in love with Istanbul.

We drove in from Ankara and before we even reached our hotel, we boarded a boat for a sail down the Bosphorus.   What a beautiful way to enter the city, the way it is meant to be seen.  We boarded under a bridge and passed by stately waterfront homes and the naval academy (where Gadaffi once attended) and the compounds of the oil rich. 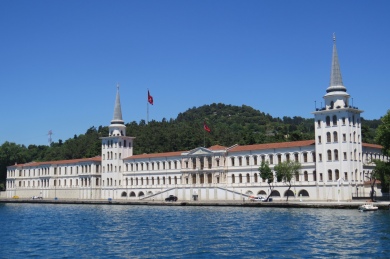 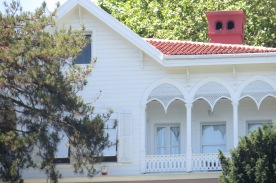 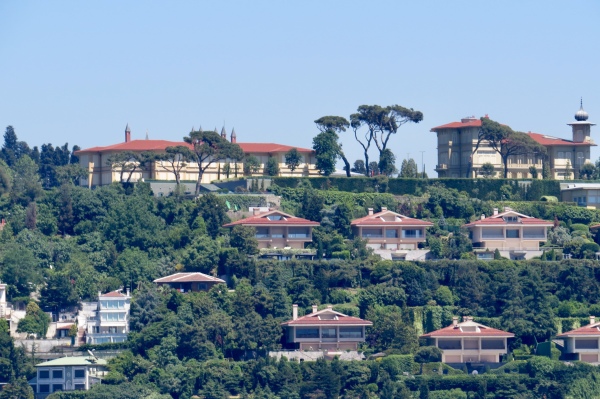 There was a somber moment passing the Reina nightclub where, on New Year’s 2017 at 1:15 a.m. an Al Qaeda operative used an AK-47 to kill 39, including 1 Canadian, and injure 79.  It has been left untouched in memorium.

We went under the bridge and mosque which mark the passing from the Bosphorus into the Golden Horn, and from Asia into Europe.

We were getting into the downtown area of Istanbul, and passed by some of the most prestigious schools and hotels in Turkey, including the Canadian Four Seasons Hotel, where the fun thrum of Bollywood music floated across the water – we could hardly sit still – at what must have been an afternoon wedding for India’s (or Istanbul’s) rich and famous, judging by the luxe garb.  We also passed the stunning Dolmabahce Palace, which could be visited. 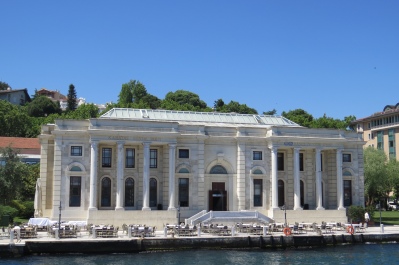 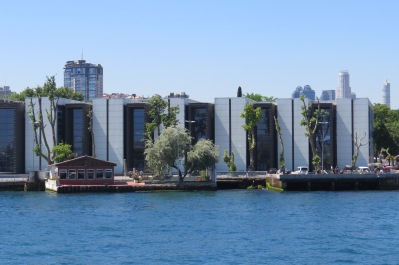 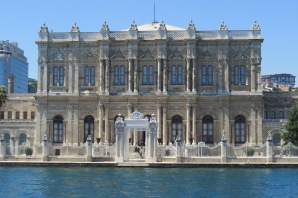 I knew we were reaching our destination when we saw the now familiar skyline – the Aya Sofia and the Blue Mosque.

We disembarked and meandered through the fish market on the way to the hotel.  It doesn’t come much fresher than this!

We still had 3 hours after checking in until dinner, plenty of time for the Grand Bazaar!  Murat took us on the tram, showed us where to go, and went off to help others buy a rug.  We wandered the shops and the streets of the bazaar, it was endless.  There are over 4,000 shops and it has been going for centuries – construction started in 1455 AD.   I had always had the impression that the vendors would drag you in and extract small fortunes from you in the bargaining process, but there was none of that.  It was pleasant to walk around, almost too pleasant, and when I was buying something, they could not have been nicer.  Apparently, after all those years, a stop has been put to the hassling.  A shame, really….. 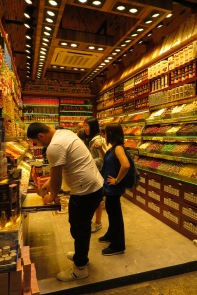 We took the convenient tram back to our hotel with the help of strangers, and met the group for our farewell dinner.  We took a funicular to the top of a very San Francisco street and plunged into some narrow streets and alleyways that were full of buzzing bars, young folks, and a lot of backgammon playing.  After a dizzying number of twists and turns we arrived at a lovely restaurant and were met by Murat’s whole family, his lovely wife, a daughter at university, a teenaged daughter and younger son.  It was so sweet of them to come!  We had a lovely final dinner together.

This idea of Norman and Julie’s to have dinner up here allowed us to wander down the hill back to the hotel.  The streets were crowded with locals and tourists, the shops brightly lit and the atmosphere fantastic.  The cobblestone streets were mostly pedestrian until someone hollered, “Scooter” or “Taksi.”  We were in no hurry to get back to the hotel and get ready for the long travel hours ahead. 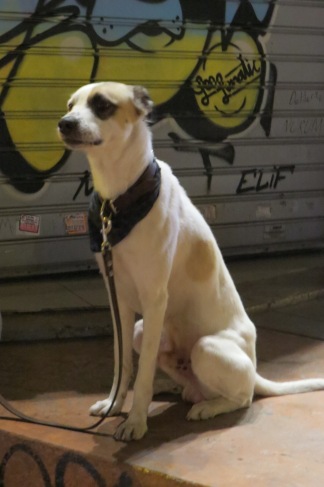 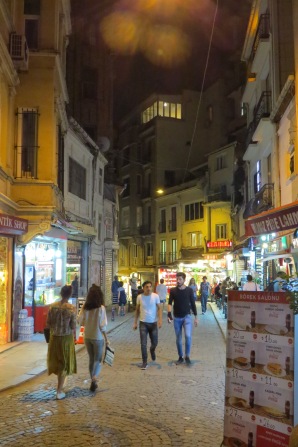 We passed by the Galata Tower, a romantic Romanesque tower built in 1348. From the top of the tower, the first French panorama painter, Pierre Prévost, drew his “Panorama de Constantinople” in 1818, which was composed of ten photos taken from the Galata Tower in the 1880s.  It’s now at the Louvre.

Someone among us said, “well, I don’t think we can go before we’ve had Raki on the Roof!”  Raki is an ouzo-like drink, licorice-based, clear but turns white when ice is added.  The Roof was the roof of our hotel, a lovely bar with open windows and a view to die for.  Oh, yes!  Some of our group were already there, and it was a warm, festive way to end the trip, sharing what we loved about the trip and where our paths might cross in future travels.

We were here during the month of Ramadan, a one-month festival where fasting for 12 hours each day is required, and it is usually fireworks which indicate the all-clear to eat, and great festive banquets are spread for breaking the fast each night.  As we gazed out at the stunning view, we saw the lights at the Blue Mosque spelling out the words “infak et mutlu ol”; our server explained the meaning, if you help others, you will be happy.  It seemed appropriate, the people here could not be kinder; I hope they are happy.

I don’t know what the future holds for Turkey, but I left a little piece of my heart in Istanbul – and the only way to get it back – will be to return.