Although Kyrgyzstan is similar to Tajikistan – once central to the Silk Route, mountainous high terrain, nomadic people and former USSR state, Kyrgyzstan has a much rougher past and present largely because of its history.

The Kyrgyz flag tells the story.  The 40-rayed yellow sun in the center of the flag represents the 40 tribes that once made up the entirety of Kyrgyz culture before the intervention of Russia during the rise of the Soviet Union.   Even though it had falllen to various foreign occupiers similar to those in Tajik, its pre-Soviet internal tribalism meant that this country has rarely seen peace.  Before Soviet times there was a steady succession of tribes and clans looking for power.  Today, after independence, the Soviet influence remains.  Kyrgyzstan is one of two former Soviet republics in Central Asia to have Russian as an official language, Kazakhstan being the other.   And since independence, the old tribalism has revived so that there are numerous threats to the Kyrgystan people coming at them literally from all directions. 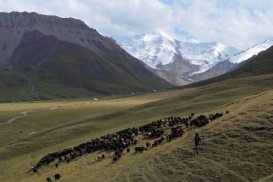 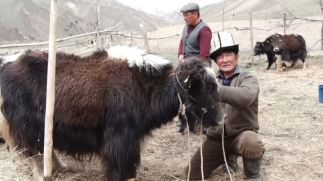 Though the tribes are divided by its many mountains, the traditional nomadic lifestyle (on the flag, the lines inside the sun represent the crown of a yurt), the tribes tend to run into each other and compete for valuable pastureland.  While Uzbeks and Tajiks traditionally farmed in the valleys, the Kyrgyz nomadic tradition continues to function seasonally as herding families return to the high mountain pasture (or jailoo) in the summer. 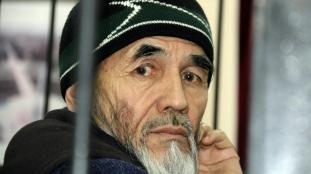 Human rights continue to be a concern in the country.  In a move that alarmed human-rights groups, dozens of prominent Uzbek religious and community leaders were arrested by security forces following the 2010 South Kyrgyzstan riots, including journalist and human-rights activist Azimzhan Askarov, who was sentenced to life in prison

American diplomats expressed concern in October 2014 when Kyrgyzstan lawmakers passed a law that imposes jail terms on gay-rights activists and others, including journalists, who create “a positive attitude toward non-traditional sexual relations.”

On 24 January 2017, a Kyrgyz court reinstated the sentence of life imprisonment for Askarov.

In 2019, Human Rights Watch issued a report on Kyrgystan, stating in part:

A law banning women under the age of 23 from traveling abroad without a parent or guardian, with the purpose of “increased morality and preservation of the gene pool” passed in the Kyrgyz parliament in June 2013.

Bridenapping.  Illegal, but still practiced, is the barrbaric tradition of kidnapping, raping and enslaving a woman and marrying her, guaranteeing her enslavement for life.

“Impunity for widespread domestic violence persists, despite a 2017 domestic violence law that mandates police and judicial response to domestic violence and guarantees greater legal protections for victims. In July, the Prosecutor General’s Office commented in the media that “in the
last two years” it had registered more than 9,000 cases of violence against women and children and had opened 5,456 administrative cases and 784 criminal cases.”

Women protest, but many are arrested.

It really is a straight man’s world in these parts.

The Switzerland of Central Asia 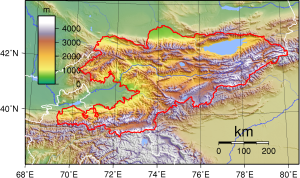 All of that said, Kyrgyzstan’s beautiful scenery and potential for mountaineering adventure is what continues to attract some tourists despite its internal political problems.  A landlocked country, it borders on Kazakhstan, China, Tajikistan and Uzbekistan. It is farther from the sea than any other individual country, and all its rivers flow into closed drainage systems which do not reach the sea. The mountainous region of the Tian Shan covers over 80% of the country, where Kyrgyzstan derived the handle, “the Switzerland of Central Asia.”

In 2006 and 2007, the number of tourists visiting was more than a million a year. However, due to the economic and political instability in the region, the number has declined in recent years.

This was the pre-COVID travel advisory.  It states:

“The security situation is tense and there is a possibility of violent clashes and civil unrest in:

There are landmines in the areas bordering Uzbekistan and Tajikistan. Use officially recognized border crossings only, as landmines may be present in uncontrolled border areas.  Violent crime is common and criminals (including organized gangs) target foreigners due to their perceived wealth.”

This doesn’t necessarily mean not going to Kyrgystan after the COVID threat is gone.  The same advisory was present when I went to Egypt.  It does suggest it would not be advisable to travel alone, especially if you are a woman, and to use a tour company you trust with the best security knowledge on the ground and to follow the advisory about situational awareness and safety.  Only you can decide about your own personal safety.

Nonetheless, if you are not risk-averse, there are some compelling reasons to visit and we’re visiting with utmost safety.

The capital city, Bishkek has broad, tree-lined streets, plenty of parks and impressive Soviet white marble architecture, such as the buildings lining Ala-Too Square.  The central square is a good place to start.   The State History Museum is one of the most impressive.  Unfortunately the museum isn’t a history of the Kyrgyz people, but a Soviet history.  It is currently shown online as permanently closed, but I am not sure if that is really permanent or COVID-related. 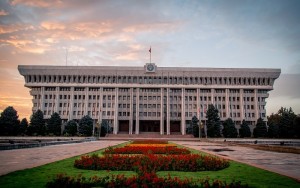 The “White House,” the marble presidential office building in the Stalinist modern style, reportedly has a secret tunnel network linking it to Ala-Too Square on the other side of the street. 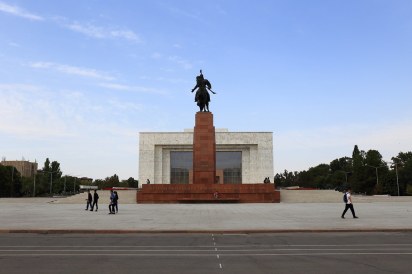 Also in the square is a monument dedicated to Manas, the iconic “Homer” of Kyrgyz culture and history.

God had blessed them from the beginning.
They had exchanged greetings with twelve saints,
Learned writing from a caliph,
And thus were called great “sahibs.”
His first forefather is Böyönkhan,
From Böyönkhan is Chayankhan,
From Chayankhan, is Nogoykhan,
Nogoykhan was undefeatable
Those who fought with him were doomed.
The last had lived along the Sumpuk River.

The Epic of Manas is perhaps the most important part of Kyrgyz culture, and is (arguably) the longest epic poem in the world. At 20 times longer than the Odyssey, this epictells the life of Manas, an epic warrior, and his son and grandson.  Each of its 500,000 lines contains 7-8 syllables and maintains alliteration and end rhyme.  Manas is the classic centerpiece of Kyrgyz literature, and parts of it are often recited at Kyrgyz festivities by specialists in the epic, called Manaschi. Manaschis tell the tale in a melodic chant unaccompanied by musical instruments.

There are some videos on YT of Manaschis performing the poem, but this was absolutely the most adorable.

The city’s Opera and Ballet Theater has productions from fall to spring.

This vast open-air market, the biggest in Bishkek, is well worth a visit.  There are heaps of all kinds of food, crafts, and housewares.

You’ll see a lot of small restaurants and food stalls where you can buy traditional Kyrgyz dishes and meals.  The food in Kyrgyzstan is hearty and delicious. Most meals consist of lamb, beef or chicken, served in dumplings, on top of noodles or rice or alongside potatoes.

Bishkek is a party town, but the night clubs start late (think Madrid).  You are warned to dress up, and “face control is strictly enforced.” 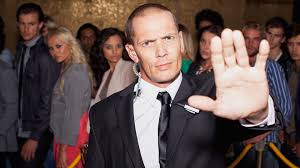 Face control:  “the policy of upscale nightclubs, casinos, restaurants and similar establishments to strictly restrict entry based on a bouncer’s snap judgment of the suitability of a person’s looks, money, style or attitude, especially in Russia and other former Soviet countries.” 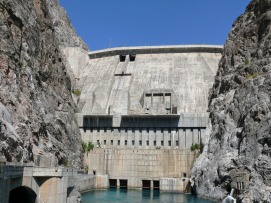 Time to get out of the city to explore the spectacular scenery.  We’ll stop off in the city of Toktogul on our way to beautiful Osh Province.    Oddly, and likely instructive, this is literally all I could find online about the city:  it is named after its most famous son – the musician Toktogul Satilganov. It is located on the northern shore of the Toktogul reservoir.

Toktogul Satilganov was a well-known poet and composer with democratic views even during the Tsarist Russia’s colonial era in Southern Kyrgyzstan (1876–1917).  His fame reached a high point in the Soviet era when his works were promoted by the state as a musician of the people and he was known throughout Kyrgyzstan simply as “Toktogul.”  Although his music was originally interpreted as dealing with the pre-revolutionary class struggle, he welcomed the revolution, writing in celebration “What woman gave birth to such a person like Lenin?“

Some of his music has more oriental flavour than Ming Kyal, but this piece has a lightness, airiness, and a bracing quality that evokes the high mountain country and the chill of the alpine lakes.   See if you agree.

Among Kyrgyzstan’s gorgeous mountains are the sparkling alpine lakes.  We’ll visit Kulun Lake, a rock-dammed lake in Osh Province. It is located at the altitude of 2856 m in catchment of Kulun River, right tributary of Tar River. 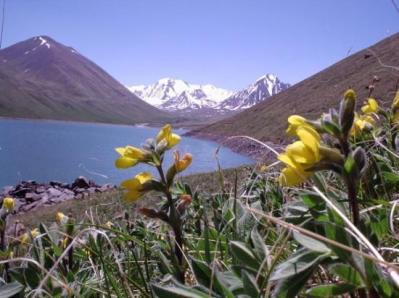 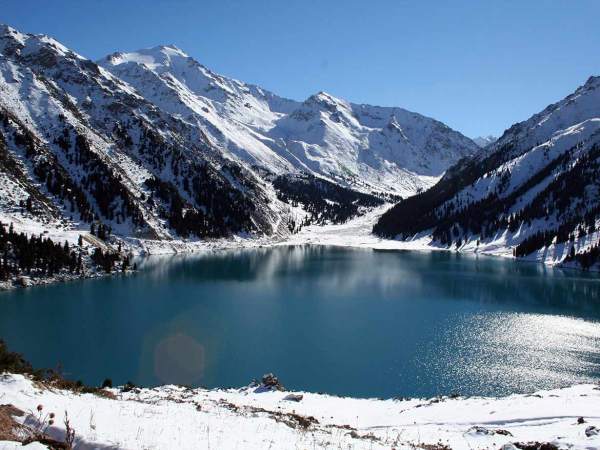 Well, this is our tour of Kyrgyzstan as I know it and the end of our tour of this part of Central Asia.  I’m sure if w were there we would continue for a few more days on our tour across this Kyrgyz landscape of endless soaring beauty.

Ah, the Silk Road, caravans of camels, yak and horsemen.  The fragrant spices and teas, colourful silks and ceramics and probably some laudanem, too, traversing thousands of kilometres, some of it through this mountainous terrain.  Central Asia is a part of the world previously veiled in mystery to me.   Nomadic people, religion mostly Muslim, culture somewhat Russian, history former Soviet  – I’ve begun to understand how all these seemingly conflicting ideas merge into these two peoples, in some ways more successfully than others.  And I’ve seen the cultured cities and the spectacular mountainous scenery.

Thanks to you, I have a few ideas as to where we will go next in our flying armchairs…