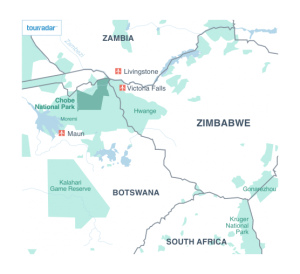 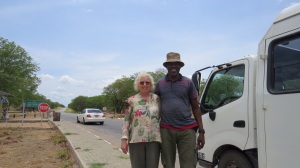 Yesterday, we crossed the border into Botswana, saying goodbye to beautiful Namibia and our amazing guide, Tuhefani (he was making the long drive all the way back to Windhoek in 2 days in order to vote in the upcoming election).

We made the short drive to the magnificent Chobe National Park. With one of the highest percentages of land set aside for wildlife preservation in the world, Botswana is one of the top wildlife destinations in Africa. Fortunately, the government of Botswana has also recognized that low volume tourism is the best way to balance the needs of tourists and the wildlife they come to see.   Today, we will be among the lucky tourists to visit. 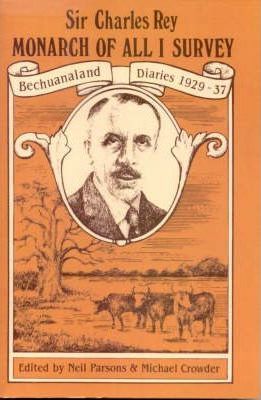 In the 1930s, British colonial commissioner, Sir Charles Rey, visited the Chobe River and subsequently proposed that the whole region become a wildlife reserve, following the trend set by the newly-proclaimed Kruger National Park in South Africa to move away from hunting and towards conservation.

In 1932, 24,000 sq km of land was declared a non-hunting area.  Creation of the national park was delayed by heavy tsetse fly infestations in 1943, but by 1953 the project was back on the table again. The Chobe Game Reserve was officially created in 1960, before becoming a national park in 1967. 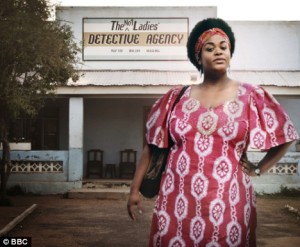 What I know of Botswana I learned mostly from Mma Ramtoswe and the Ladies No. 1 Detective Agency books by Alexander McCall Smith and the HBO series.

In the 14th century, Botsana’s history had all the drama of an opera.  One of the most significant developments in Botswana’s human history was the evolution of the three main branches of the Tswana ethnic group during the 14th century.   Three brothers – Kwena, Ngwaketse and Ngwato – broke away from their father, Chief Malope, to establish their own tribes.  In the 18th century, following a quarrel between Chief Khama I and his brother, Tawana, the Ngwato clan split further.  Tawana left Serowe and established his chiefdom in the area around Maun. The four major present-day Batswana groups – the Batawana, Bakwena, Bangwaketse and Bangwato – trace their ancestry to these splits and Botswana’s demographic make-up owes much to the dispersal of the various groups.

In 1836 around 20,000 Boers set out on the Great Trek across the Vaal River into Batswana, setting up their own state ruling the Transvaal – a move ratified by the British in the Sand River Convention of 1852. Effectively, this placed the Batswana under the rule of the so-called new South African Republic, and a period of rebellion and heavy-handed oppression ensued. Following heavy human and territorial losses, the Batswana chiefs petitioned the British government for protection from the Boers.  Eventually the British conceded, triggering the first Boer War.  The war continued until the Pretoria Convention of 1881, when the British withdrew from the Transvaal in exchange for Boer allegiance to the British Crown. 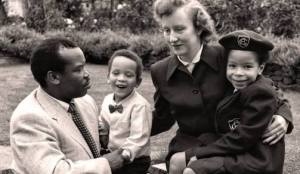 The extent to which the British subordinated Botswanan interests to those of South Africa during this period became clear in 1950. In a case that caused political controversy in Britain and across the Empire, the British government banned Seretse Khama from the chieftainship of the Ngwato and exiled him for six years. This was done in favour of South Africa, who objected to Khama’s marriage to a British woman at a time when racial segregation was enforced in South Africa.

In the 1950’s, the idea of an independent Botswana germinated.  In 1962, the moderate Bechuanaland Democratic Party formed and set a timetable for independence and a new nonracial constitution, drawing on support of the local chiefs.  The British gratefully accepted the BDP’s peaceful plan for a transfer of power, and Khama was elected president when general elections were held in 1965. On 30 September 1966, the country – now called the Republic of Botswana – was granted full independence.  The BDP has been in power ever since, winning 38 of 57 seats in last month’s election.  On November 26, 2019, joint opposition parties challenged the results of voting in 19 constituencies, a move that could result in the country’s electoral commission calling fresh elections in those districts, so the long hold of the BDC may be starting to fracture.

Sundowner Cruise on the Chobe River

After checking into the lovely Chobe Safari Lodge, we took a late afternoon boat ride.  The Chobe River runs through the park, and there are islands and tributaries making an excellent home for many creatures, including the incredible hippopotamus.

The hippopotamus must be one of the most unusual animals on the planet.   Despite their physical resemblance to pigs and other terrestrial even-toed ungulates, the closest living relatives of the Hippopotamidae are cetaceans (like whales, dolphins, porpoises) from which they diverged about 55 million years ago.

Hippopotamuses love water, which is why the Greeks named them the “river horse.” Hippos spend up to 16 hours a day submerged in rivers and lakes to keep their massive bodies cool under the hot African sun. Graceful in water and good swimmers, they can hold their breath underwater for up to five minutes. However, they are often large enough to simply walk or stand on the lake floor, or lie in the shallows. Their eyes and nostrils are located high on their heads, which allows them to see and breathe while mostly submerged.   Both reproduction and childbirth occur in water.

Although hippos lie close to each other in the water, they are actually solitary and do not seem to form social bonds except between mothers and daughters. Occasionally, they will bask alone on the shore, and if their skin cracks, they secrete an oily red moisturizer which gave rise to the myth that they sweat blood.  They rise gracefully from the banks of the water at night to graze alone on about 40 kilo of grasses.  After a night of feeding, they return to the water in the exact same place, so you do not want to get between her and the water.

Their powerful jaws are capable of opening up to 150 degrees revealing their enormous incisors.  Male hippos appear to continue growing throughout their lives as do their ivory canine teeth which can reach 50 cms long.  On land, they are capable of running 30 km/h over short distances.  The hippo is highly aggressive and unpredictable and all these factors make the hippo one of the most dangerous animals in the world.

Hippos have long been popular zoo animals. The first zoo hippo in modern history was Obaysch, who arrived at the London Zoo on 25 May 1850, where he attracted up to 10,000 visitors a day and inspired a popular song, the “Hippopotamus Polka.”

We saw loads of these unique creatures today. 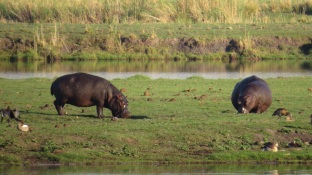 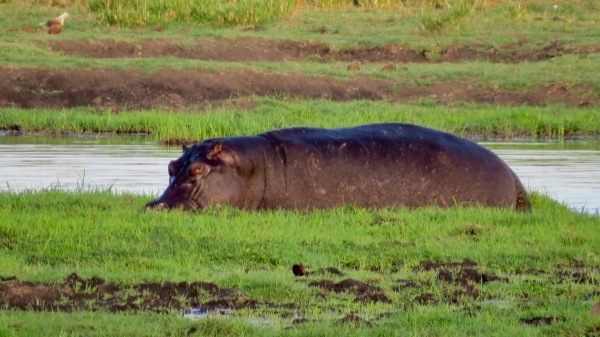 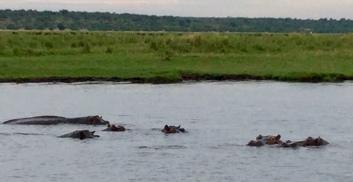 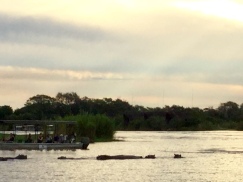 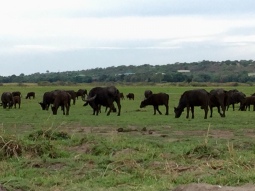 We also saw the Waterbuck, whose unusual backside markings are explained by the joke that the waterbuck was the first antelope to use the freshly painted toilets on Noah’s Ark.

Some of the critters we have seen before were here, too. 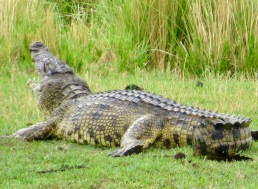 Chobe being what it is, we didn’t have to leave our hotel before we saw wildlife. 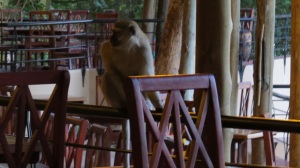 We got up at the break of dawn for a game drive in the park.  No sooner had we registered with the park ranger and pulled into the park, than we saw these beauties: 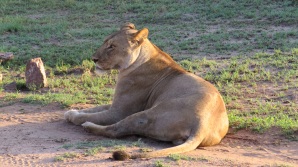 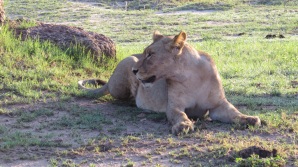 We saw some more beautiful animals I have already described, as well as the hideous monitor lizard and a pair of alligators fighting, but the fellow in behind gave up quickly. 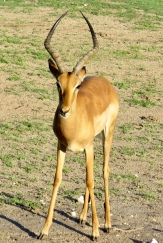 Spring is an absolutely lovely season to visit, we saw so many adorable babies! 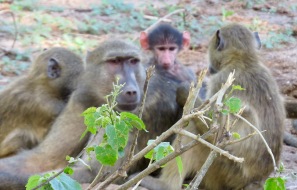 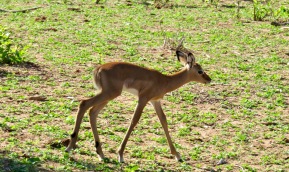 The warthog mama and her babies were an adventure, because they were living under the porch of my cabin and I had to be escorted to my room by security.  You don’t want to come between this mama and her little ones, she has nasty, razor-sharp  tusks and is perfectly willing to use them in their defence.   I felt quite sorry for her – how hard it must be to raise little ones when you can’t talk, have no thumbs, are surrounded by predators and find yourself trying to raise them among the bedlam of a sprawling hotel.  All three of them had to back into the hole she made one at a time to access the safe space under my porch.

Tis group of elephants strolled past us so closely that we held our breath when these two turned toward us and shot us a meaningful glance – but one look at us oldsters and they shrugged, turned and carried on.