Cape Town is the founding city of South Africa and was established in 1652 as a refueling station for Dutch ships bound for the East (the Spice Route).    Dutch settlers were sent here to supply the ships of the Dutch East India Company.  The city is often referred to as the Mother of South Africa because it gave birth to the nation.

We visited “The Captain’s  Garden” on the site of the original garden where the first Dutch settlers grew their vegetables.  Now a botanical garden with an amazing array of trees, many of them came as gifts from countries around the world since it is located at the presidential palace.  A medicinal garden has been planted in tribute to  the first garden here, and a white rose HIV memorial garden has been added.    At the cafe, we had delicious red cappuccinos, made from rooibos tea. 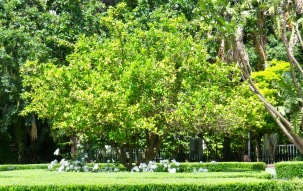 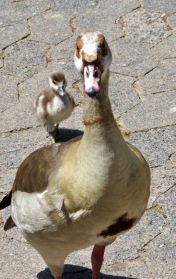 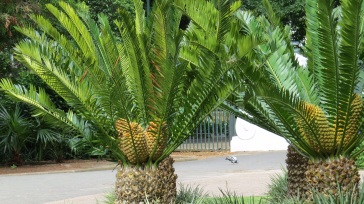 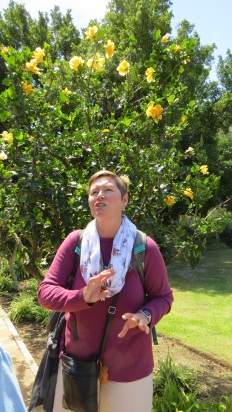 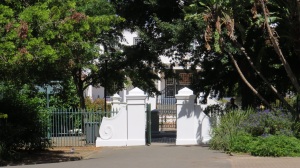 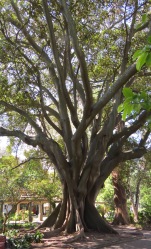 On leaving the garden, we saw Archbishop Desmond Tutu’s home cathedral.  Next to it, a memorial to him was erected two years ago, known fondly as, “The Arch’s Arch.” 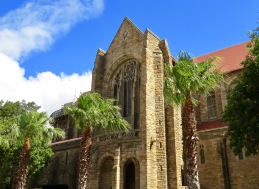 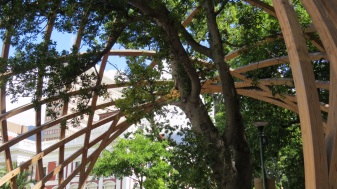 Spices were imported from Indonesia in bulk and brought huge profits due to the efforts and risks involved and seemingly insatiable demand.  The fusion of influences between Indonesia and the Netherlands is still present today in both the Netherlands and in Indonesia, especially in fusion of cuisines.  Similarly,  Indonesians came to Cape Town off Dutch ships as slaves, and their descendants are now known as “Cape Malay.” From their colourful enclaves, they have also influenced Cape Town’s cuisine, further discussed here

We visited the Cape Malay district and visited the Atlas Trading Store’s spice shop where fragrant bags of spices still roll in today.

We walked around the colourful neighbourhood, and were told the fashion industry often does photo shoots here.  We looked up, and… 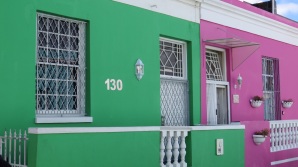 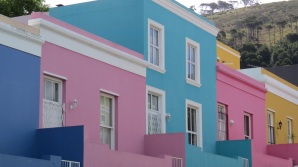 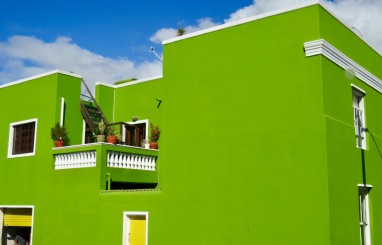 “CAPE Town is South Africa’s Los Angeles
to Johannesburg’s New York — the glitzy,
gorgeous, self-obsessed foil to its grittier,
more serious and more powerful big sister.
Which is not to say that it lacks a serious
side. Cape Town holds its own with
Johannesburg as a locus of South Africa’s
liberation struggle, and no other African
city combines heart-stopping beauty and
historical gravitas so effortlessly.”

The legislative capital of South Africa, the city is known for its harbour, its natural setting in the Cape Floristic Region and for landmarks such as Table Mountain and Cape Point. It is one of the most multicultural cities in the world, reflecting its role as a major destination for immigrants and expatriates to South Africa.  The city was named the World Design Capital for 2014 and was named the best place in the world to visit by both The New York Times and The Daily Telegraph.  There are few better places to saunter aimlessly – and get a thrill out of it – than Cape Town. A fascinating blend of African, European and Malay influences, this wonderful city has emerged as the cosmopolitan heart of South Africa. 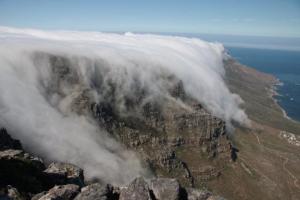 The name Table Mountain is self-evident, but the mountain itself is unsurpassed as a dramatic backdrop to the gorgeous city sprawling below.   Yesterday, we hoped to take a cable car to the top for spectacular views, but our tour description was “weather permitting” – the flat top of the mountain is often covered by orographic clouds, formed when a south-easterly wind is directed up the mountain’s slopes into colder air, where the moisture condenses to form the so-called “table cloth” of cloud. Legend attributes this phenomenon to a smoking contest between the Devil and a local pirate called Van Hunks.  When the table cloth is seen, it symbolizes the contest.

Instead, we went up Signal Hill for fabulous views of Robben Island and the city. 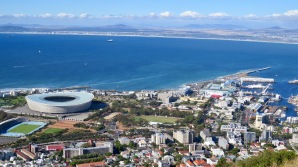 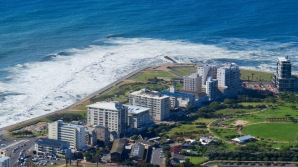 This morning was gloriously clear, and we made our way to the Table Mountain gondola to the peak for spectacular views of the city.  The wildflowers were spectacular, too. 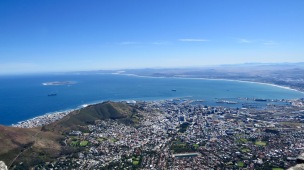 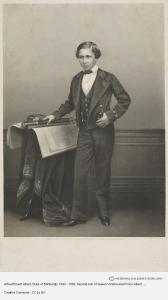 The V & A Waterfront refers not to Queen Victoria and her beloved Albert like the museum in London, but to Queen Victoria and her second son, Prince Alfred, who inaugurated the V&A Waterfront’s construction as a 16-year old midshipman in the Royal Navy in 1860. He returned 10 years later for the official opening of the completed works in July 1870. The area had electricity 10 years before the rest of Cape Town.

The Waterfront has had a modern renewal and has become South Africa’s most-visited tourist destination.  We are staying in this  area comprised of a busy working harbour and with shops and restaurants, The Watershed, a beautiful and vibrant market for ceramics, textiles, furniture, fashion and jewellery. Also at the V & A are Africa’s premiere modern art gallery, the MOCAA, the South African Maritime Museum and an aquarium.  I am going shopping! 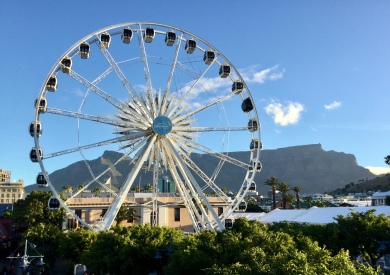 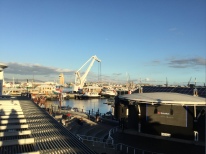 Another contribution from the New York Times, a blossoming love story from New York to Cape Town:

Capetonians have an expression that captures the atmosphere – “Moenie worry nie” – relax and enjoy.

PS. This is off-topic but I just discovered this incredible website for van Gogh lovers – “Unravel van Gogh” by the van Gogh Museum:    https://ontrafel.vangogh.nl/en